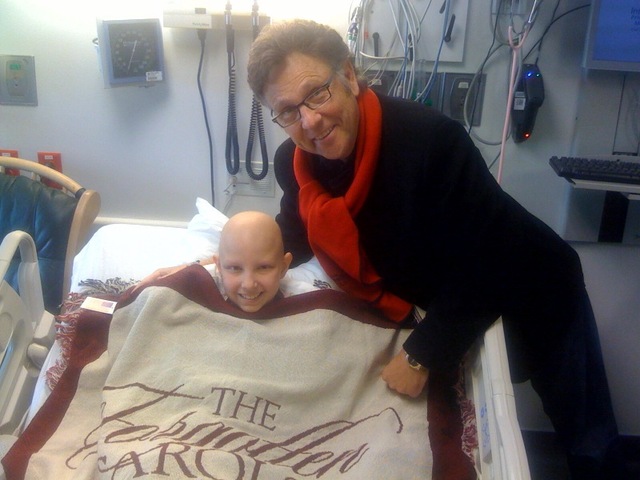 Truly living as the Christ-like character he displays on stage each night, McLean surprised Mindy, a cancer patient at Primary Children’s Medical Center in Salt Lake City, by bringing the genuine spirit of Christmas to her very room.

On December 7, Fox 13 News aired Michael McLean announcing a chance to win a Forgotten Carols gift package. All fans had to do was become a Forgotten Carols Facebook fan and post comment on the wall. When scrolling through the contest entries, McLean noticed one particularly striking comment that read, “Wish we could go but we are stuck in the hospital up at Primary’s. Wish he could make a visit to Room 4413.”

Those simple words touched McLean’s heart and he tracked down the telephone number to the Ketterling’s room. McLean spoke with Mindy’s mother, Alesha Ketterling, and learned of Mindy’s condition.

Diagnosed earlier this year with osteosarcoma, a children’s bone cancer, Mindy was just days away from undergoing her last round of chemo therapy when her mother noticed her dangerous platelet level. They piled in an ambulance and rushed the 4-hour drive from their hometown of Burley, Idaho to Primary Children’s hospital in Salt Lake City.

The next day, McLean decided to surprise Mindy and her mother in the hospital. As he and two cast members, Jordan Bluth and Gilad Getz, entered the hospital room, the smiles of both mother and daughter lit up the room. McLean wrapped a Forgotten Carols blanket around Mindy as she told him of her love for the musical.

“My mom has the CD,” Mindy said. “We listen to it all the time. My mom was in the show once, and my uncle was in it. It’s a good family tradition.”

During the visit McLean learned that Mindy would be released from the hospital that afternoon and he offered Mindy tickets to the show that night. Mindy readily accepted, excited for the chance to see the show.

“This all has been really hard, but the spirit of Christmas becomes brighter just knowing that people care,” Ketterling said. “The fact that Michael came is amazing.”

After 30 minutes of talking, laughing and picture-taking, Michael gave Mindy a goodbye hug and said, “Who loves you, Mindy?”

For more information about the Forgotten Carols, visit forgottencarols.com.