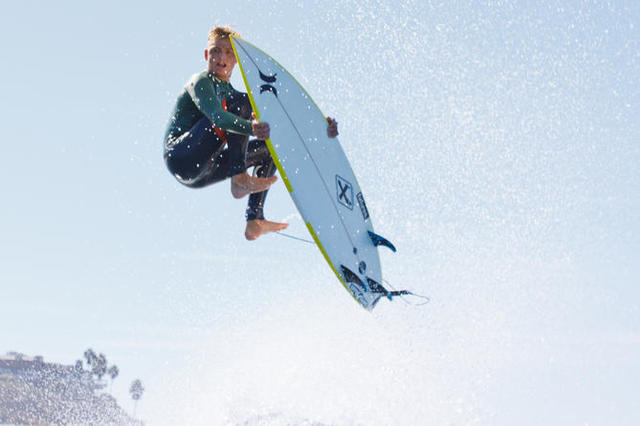 Recently, he won the Surfing America 2016 series championship. Last year he won the title of King Grom when he beat out nine other surfers from around the world to compete on a Brazilian island. Oh, and he's only 17.

Hey, kids, aren’t you glad you aren’t 17-year-old Jordy Collins? He surfs three-four times a day — “I try to surf every day,” he says — but he does get Sundays off. Poor kid. He surfs because it’s basically his job. The working conditions are brutal — all that sun and water, you know. How does he stand it?

He has to endure a commute every day. From his home in Carlsbad, California, he has to walk two entire blocks to get to the beach — that is, when he isn’t traveling to competitions in Hawaii, Brazil, Mexico, Barbados, Florida, Virginia, North Carolina. … Each year he moves to Hawaii for a few weeks to train. It’s a tough life, but someone has to do it. What about school, you’re wondering? He home-schools so he can surf full time.

You could get used to being Jordy Collins.

His life sounds like one Endless Summer (cue the Beach Boys music), but this is serious business for him. He is one of the rising young competitive surfers in the country. He competes on the Qualifying Series tour, which is to the World Surf League what Triple A baseball is to the Major Leagues. He’s trying to earn his way into the big leagues.