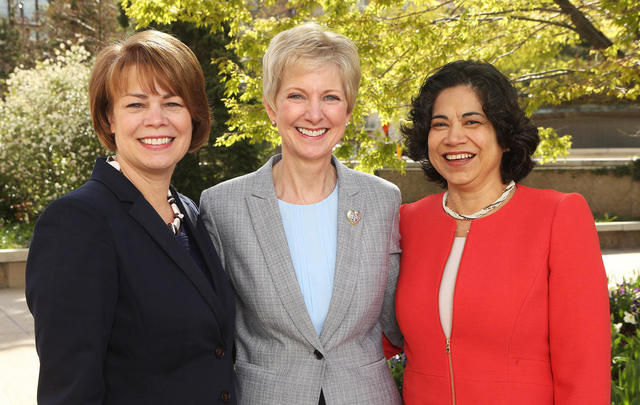 Learn more about the inspired women who were just sustained as our new leaders in the Relief Society.

The First Presidency of The Church of Jesus Christ of Latter-day Saints announced a new Relief Society general presidency during the 187th Annual General Conference on April 1. Members sustained Sister Jean B. Bingham as president, Sister Sharon Eubank as first counselor and Sister Reyna I. Aburto as second counselor. Today there are 7,107,193 Relief Society sisters worldwide; they reside in 188 countries. Following are brief biographies of the new leaders:

Having lived in several locations in the United States, Sister Jean B.Bingham appreciates how the gospel provides a stable influence during changes in environment.

Born in 1952 in Provo, Utah, to Robert and Edith Joy Barrus, she grew up with six sisters and two brothers. She attended elementary school in Texas and Minnesota, finishing high school in New Jersey. She and her siblings were the only LDS students in their schools until they moved to New Jersey, where she was delighted to discover a girl from her new ward in her freshman class.

After she and Bruce Bingham married in the Provo Utah Temple on Dec. 22, 1972, they moved to Illinois to continue his schooling. As she has traveled during her time as a Primary general board member and as a counselor in its general presidency, Sister Bingham has seen the challenges and blessings of being a member of the Church in areas across the globe.