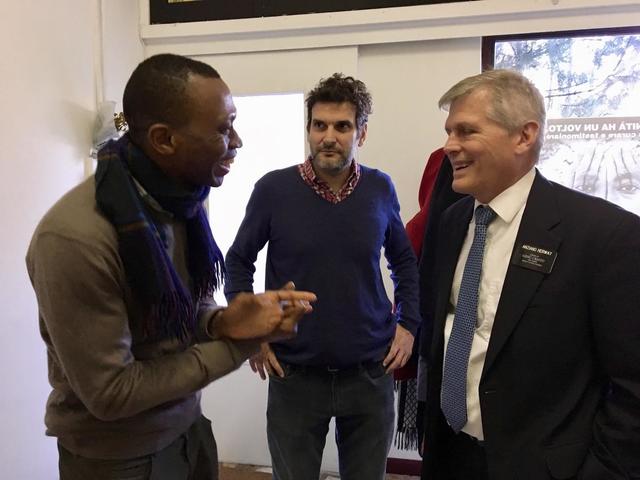 "Their needs are so great," said Sister Herway. "They literally have nothing. They have left it all behind in reaching for a better life. Their gratitude for the smallest kindnesses shown them is wonderful. I wish everyone could have this experience. Their worlds will never be the same."

While living in Europe for nearly three decades, Tom and Anita Herway took frequent trips to Italy. Sometimes they were work-related, with Tom based in Belgium as the NATO's chief of contracts; other times, they were personal vacations. Like other tourists visiting Italy, they would see refugees in the streets and plazas, never paying them much attention.

Fast forward to 2017. Living in Rome following retirement, the Herways see refugees in a different light.

For example, they recently met with a young man who fled his native Somalia, fearing for his life. Family members there had been exploited, then killed when they resisted. With no immediate relatives remaining, he gestured to others in the temporary camp — fellow refugees and Italian volunteers — and called them “my family.” His only desire was to work in a store and have a safe, peaceful life.

The Herways — now Elder and Sister Herway — see refugees with a greater purpose, as The Church of Jesus Christ of Latter-day Saints' first-ever senior missionary couple in Italy assigned specifically for humanitarian and refugee service. They’re joining the LDS Church and its members in Italy, as well as other charitable partners, in helping refugees.

"Many of them are scared to talk," Elder Herway said. "They have been deceived, abused and exploited both at home and in their journey, so this is understandable. Refugees are very vulnerable to exploitations. But when we've been able to talk to them, it's always an eye-opening experience to hear first-hand what is really going on."