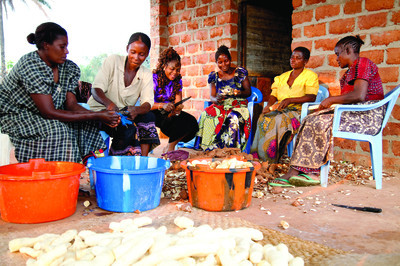 With their cassava fields decimated by disease, world cassava markets shrinking, and the country still reeling from the effects of a long civil war, Church leaders in the DR Congo were concerned about their members' welfare. Men, accustomed to working in the fields, found themselves with no gainful employment. Members of all ages were suffering from severe hunger and malnutrition. Church leaders sought help from LDS Charities to salvage this important crop to provide jobs and much needed nourishment.

Cassava is a woody, edible root that grows well in poor soils with little rainfall. It is the world's third-largest source of carbohydrates, providing a third of the caloric intake to people in sub-Saharan Africa. Because it can be harvested as needed, cassava acts as a famine reserve; however, the edible root is also susceptible to mold and disease, and contains an abundance of toxins, mainly cyanide.

With cassava's many challenges, it remained a major export for the DR Congo and a primary food source for its 71 million people. Unfortunately, the long civil war and an outbreak of disease combined to decimate the country's cassava fields. The shrinking international cassava market caused further distress for the impoverished rural farmers. The resulting effect was severe hunger and malnutrition.