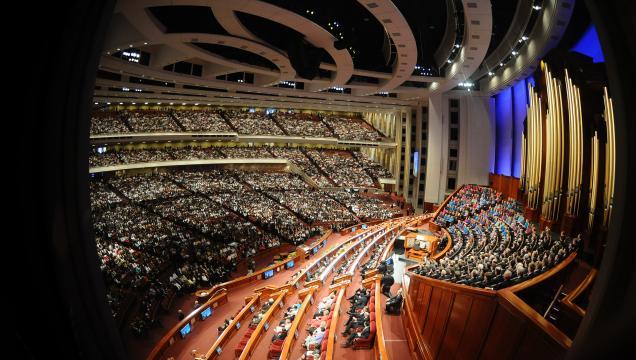 October 4, 1856 - Brigham Young calls for volunteers to rescue the Willey and Martin handcart companies at Martin’s Cove. Dozens of wagon teams laden with supplies set out for Wyoming.

April 6, 1877 - Conference is held in St. George for the only time; leaders dedicate the newly completed St. George Temple.

October 1890 - Members vote to approve the Manifesto, ending the church’s endorsement of polygamy.

October 3, 1924 – Conference is broadcast on the radio for the first time.

April 1932 - Elder Stephen L. Richards gives a controversial speech on the Word of Wisdom that is reportedly the only conference address in history that wasn’t published. (It was published much later in an issue of Sunstone.)

October 1949 – Conference was broadcast on television for the first time.

September 30, 1978 - Members vote unanimously in favor of the revelation to extend the priesthood to all worthy men, regardless of skin color.

April 1985 - Elder Bruce R. McConkie gives his final speech, “The Purifying Power of Gethsemane.” He died of cancer a matter of days afterward. The original poem cited in the speech was later converted into the hymn, “I Believe in Christ.”

April 1996 – President Hinckley announces construction of what would become the Conference Center.

April 1999 – President Hinckley announces that the Nauvoo Temple will be rebuilt.

October 2007 – President Hinckley “knights” Henry B. Eyring with his cane as he appoints the Apostle to Second Counselor in the First Presidency.

April 2008 – President Monson wiggles his ears to illustrate a story in his priesthood session talk; the act becomes an overnight internet sensation.

April 2011 – A visiting member from Australia flashes a memorable smile to the cameras as the last session closes, creating a clip that would go viral on YouTube.

What conference moment is most memorable for you?