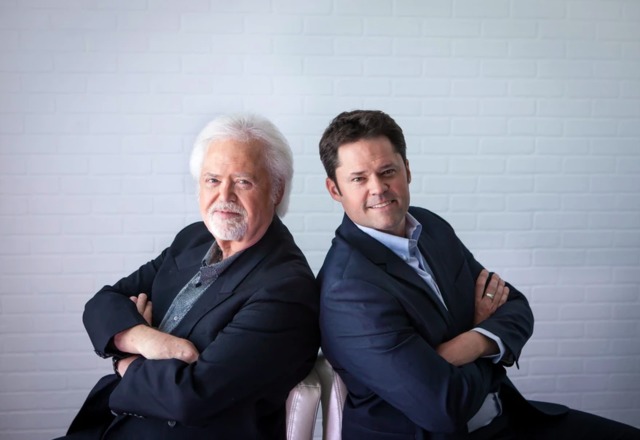 From the Osmond family's relationship with Elvis Presley to Justin Osmond's experience as a deaf person, father and son Merrill and Justin Osmond are sharing some of their greatest life lessons through their new video podcast, Sound Advice.

Do you have five minutes or less to be inspired? Want to learn more about the beloved Osmond family? Then tune in to father and son Merrill and Justin Osmond's new Sound Advice video podcast series. Each heartwarming episode is packed with photos, stories, and an important life lesson.

Here are some highlights from just a few of my favorites.

From "Singing for Hearing: Why the Osmond Brothers Got Started":

"My mother and father wanted a family, and the two sons who came first were Tom and Virl. Both have severe hearing loss," Merrill Osmond says. "And the doctors at the time came to my parents and said, 'Don't have any more children. In fact,' they said, 'you've got to institutionalize these boys.' My mother immediately said 'no way' to that."

Instead, Merrill explains, his mother spent countless hours on speech therapy with Tom and Virl. "We knew that we didn't have any money to just go out and buy hearing aids, so we had to come up with some scenario in which we could make some money. And because we were little barber shoppers, we said, 'Hey, let's go out and sing a song.' Some people threw change on the floor that we would go pick up during our performances. And anything we could find we put in a little fund to buy hearing aids for our brothers."

In this episode, learn how this action ultimately led to raising billions of dollars for children across the United States.

From "The King and Kindness":

"Elvis Presley was like a second brother to us," Merrill Osmond says. "He loved the brothers, he stood up for the brothers, he actually came out and said a lot of good things about the Osmonds."

Click the episode below to learn the inspiring thing Elvis Presley told the Osmonds back stage that touched Merrill's heart.

► You'll also like: Justin Osmond Talks About Being Deaf in a Musical Family in Inspiring New Ted Talk

From "Embracing Who You Are":

"When I was born, they didn't have the newborn hearing screening," Justin Osmond explains. "So for about two years, I lived in a world of complete silence." He continues, "I've always felt socially awkward because of my deaf accent. I remember wishing I could sound normal, like everyone else."

Click the episode below to learn what Justin's mother told him that finally helped him to accept himself just as he is.