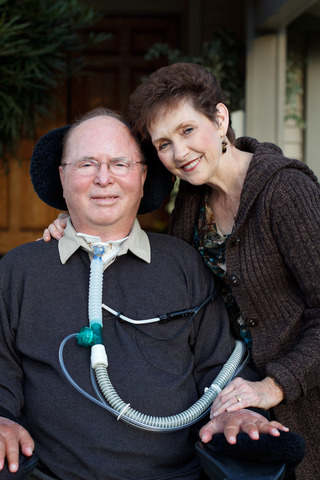 Jack was injured in a body surfing accident 20 years ago, when he was 50 years old. While enjoying a beach vacation with his wife, Jo Anne, and their six children in Southern California, he decided to play in the waves with his 16-year-old son. Jack was riding a harmless-looking wave to shore when suddenly it pounded him into the sand, damaging his spinal cord beyond repair. As a result, he is paralyzed from the neck down and is dependent on a respirator.

Jack may be injured in body, but not in spirit. Despite his tragic accident, Jack keeps a positive attitude that many without his trials find difficult to maintain. What is most impressive is that he doesn’t use that attitude purely for his own benefit - he reaches out to others who are struggling and says, "Look, it's good to be alive."

Sharing the Story Through Jack's writing and videos, he has done many people a world of good. Since his YouTube video "It's Good to Be Alive" was posted two years ago, it's had 460,000 views. Viewers regularly write to Jack telling him what his message has meant to them. "Almost every day I get e-mails from people all over the United States, and places like England and New Zealand," he says, "and they are not members of the Church. They are people who have great faith."

Jack's message contains many stories of his life and includes a lot of humor, mostly playful jabs at his situation. "They love the humor. They are blown away that someone in this condition can have a sense of humor about what had happened," Jack says. In one part of his YouTube message, he talks about how he always wanted to be the best at something, but he never was. He said when he became injured, he thought, "You know, maybe I can be the best quadriplegic on a respirator that ever lived." But the next thing he knew, Christopher Reeve became paralyzed. "And I'm in competition with Superman!"

But Jack's fans consider him to be a hero in his own right. He's even saved lives. Jack tells of a time when he received an e-mail from a woman who had been considering suicide. She told Jack that she was in deep depression, but came across his YouTube clip "It's Good to Be Alive" and had to rethink things. "She was so embarrassed with herself that she let herself sink to that level," he says.

Jack says he's been prompted to share his story with others. "I came through [my situation] and felt like I had a message to share with others, that we need to have faith in God, and that it's only through His help that we can make it through this mortal existence. Even though I'm paralyzed and on life support, the quality of my life is so good, and I have a feeling of peace and joy that I never thought I would have. I just feel obligated to share that message."

"It's just overwhelming to me how badly people want hope like this," he continues. "We had no idea that this would happen."

Not a Slam Dunk For the first three or four years, Jack found himself able to function, but not much more. He simply lived and got used to his new way of life - being dependent on others, being dependent on the respirator, and doing all he could to heal. "It was not just a slam dunk," he says. "It took time." Jack recalls that he finally came to grips with what had happened to him, and that this was how he was going to live out the rest of his life. He would have to make the best of it. "I simply could not have done it without the help of the Lord and His spirit in my life. I owe everything to Him. The last fifteen or sixteen years have been really wonderful."

A Wonderful Companion Jack's inspiring story would not be possible if it weren't for his wife. Before the accident, Jack and Jo Anne had already been a very close-knit couple - married for 25 years with six happy children. While their relationship changed when Jack was injured, it was not for the worse. "In many ways, we are much closer to one another than we ever were." Jack says that the accident caused her to make a bigger adjustment than he did. At the time of the accident, she still had children in the house that she had to raise, but she rose to the occasion and shouldered the responsibility of running the household and taking care of Jack. "Her love and support has really kept me alive. She has been a great blessing."

Strength through Trials Jack's inspiring faith has proved a rock in his own family as well as those he has never met. He says, "I do believe that every one of us, at one time or another, will have challenges and obstacles that come into our lives. But if we have faith and are willing to keep the commandments . . . we will be able to overcome the challenges that come into our lives."

Jack concludes by saying that we will all have to make a choice. "Not one of us [can] escape mortality. My challenge is very obvious, but everyone has their own unique challenges that are not as visible as mine. We can either go away from God and lose our faith, or adversity can bring us closer to Him."

People I'm A Mormon Health InspirationI'm A Mormon,Health,Inspiration,People
Comments and feedback can be sent to feedback@ldsliving.com