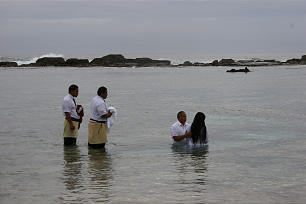 Messages of inspiration from President Monson

A few years ago I read an article written by Jack McConnell, M.D. He grew up in the hills of southwest Virginia in the United States as one of seven children of a Methodist minister and a stay-at-home mother. Their circumstances were very humble. He recounted that during his childhood, every day as the family sat around the dinner table, his father would ask each one in turn, "And what did you do for someone today?" The children were determined to do a good turn every day so they could report to their father that they had helped someone. Dr. McConnell calls this exercise his father's most valuable legacy, for that expectation and those words inspired him and his siblings to help others throughout their lives. As they grew and matured, their motivation for providing service changed to an inner desire to help others.

Besides Dr. McConnell's distinguished medical career — where he directed the development of the tuberculosis tine test, participated in the early development of the polio vaccine, supervised the development of Tylenol, and was instrumental in developing the magnetic resonance imaging procedure, or MRI — he created an organization he calls Volunteers in Medicine, which gives retired medical personnel a chance to volunteer at free clinics serving the working uninsured. Dr. McConnell said his leisure time since he retired has "evaporated into 60-hour weeks of unpaid work, but [his] energy level has increased and there is a satisfaction in [his] life that wasn't there before." He made this statement: "In one of those paradoxes of life, I have benefited more from Volunteers in Medicine than my patients have." There are now over 70 such clinics across the United States.
Read the rest of this story at ldschurchnews.com