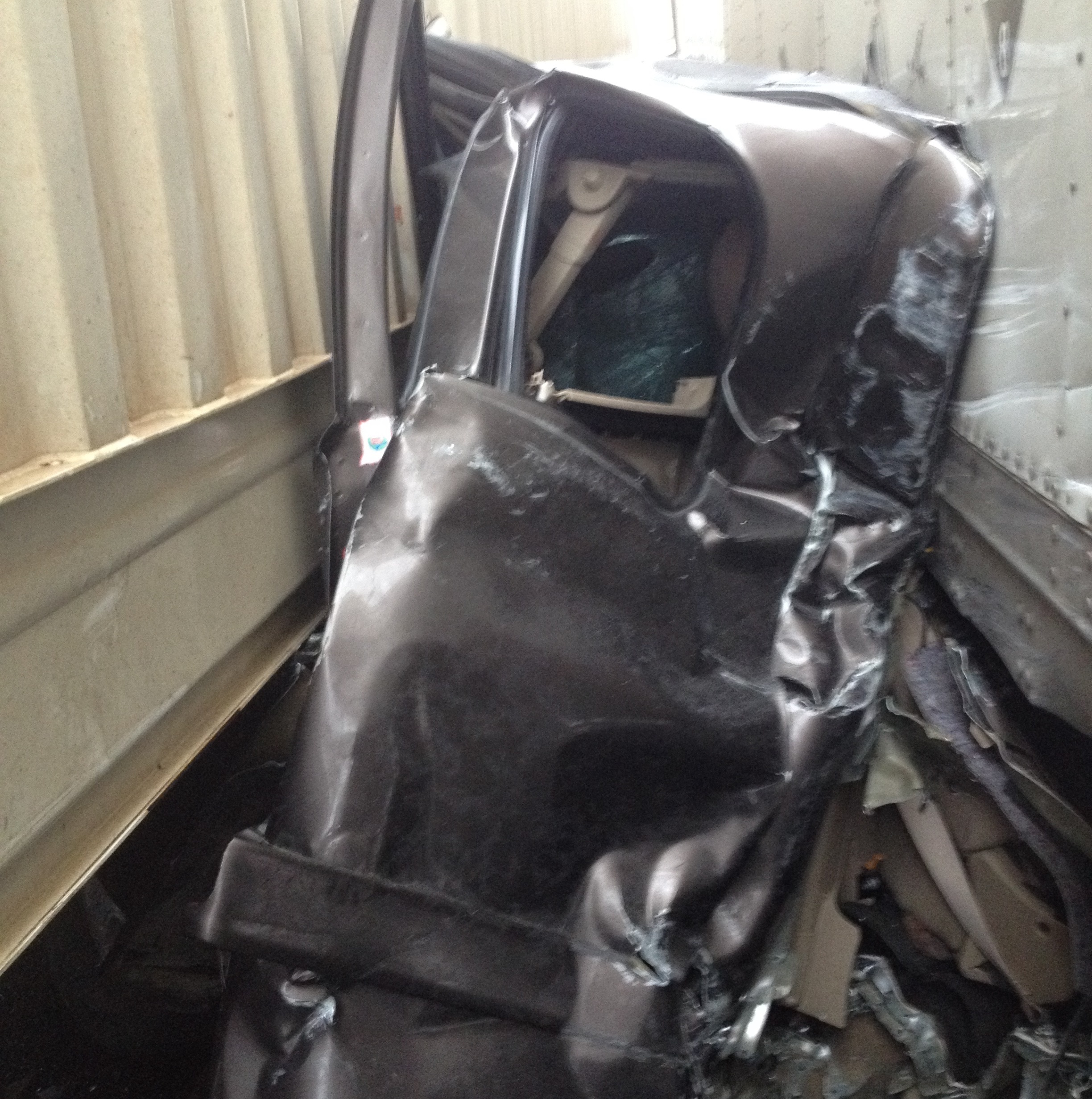 BYU graduate Kaleb Whitby was traveling down the frozen Oregon interstate, when suddenly, the semi-truck in front of him began to jackknife.  Whitby reacted immediately, shifting down his Chevy truck and braking, but there was little he could do to stop skidding across the asphalt coated with black ice.

Whitby’s truck smashed into the semi-trailer, and the force spun his car around.  “While I was sitting there helpless and in the dark, I looked out my passenger window and saw lights coming straight at me,” Whitby recalls. Those lights he saw through the water-streaked window were the lights of an oncoming semi.

“I could hear it coming, the brakes, the engine, and then the crash,” Whitby says.

“Before it hit me I remember praying and saying ‘thank you’ to my Heavenly Father for protecting me through the impact with the first trailer. When I saw the lights coming at me, the prayer continued but changed to ‘Please help me’ repeated over and over. . . . My thoughts turned to my wife and son and future baby and how much I love them. All I did was turn my head forward, grip the steering wheel tightly, and hope for the best.”

When the semi finally made impact, Whitby’s car was crushed around him, collapsing like an accordion.  The front end of Whitby’s extended-cab pickup became jammed between the small crevice created by the semi’s two trailers.  Had the car moved a foot in either direction, or had the car been anything other than a truck with an extended cab, Whitby would have been crushed.

“When I realized that I was alright, even though I was pinned in a very small space, all I could say was ‘thank you’ while continuing to pray for protection and the ability to get out of the pickup. I just remember bracing for the worst and leaving the rest to my Heavenly Father.”

Whitby was stuck between the two semis for over a half an hour before rescue teams could cut him free of the wreckage.  Walking away from the accident, Whitby was completely sound save for a few scratches and a single bruise.  And he knew, even in that moment, what power it was to which he owed his life.

“I can’t express enough gratitude to the Lord for His protection in a time I felt so alone,” he says. “It has reaffirmed my faith in God, the power of a prayer, the protection that he offers His children, and the power of the garment and the priesthood which were all helping to protect me. I play the scene over and over in my mind and I can never see the situation ending the way it did without divine intervention.”

After the crash, it took Whitby another 12 hours and over 200 miles before he could see his wife and son again, who were waiting for him in Basin City, Washington.  Whitby’s parents drove him the long miles home.  Shaken and anxious, Whitby kept reliving moments of the accident along the drive, only feeling at peace once he finally had his wife in his arms.

Now that Whitby has had time to process the accident, he recognizes that this experience has altered his perspective, providing an intense gratitude of the life he has been given and a clarity of what is most important. “A lot of things in this life can be replaced,” Whitby says. “What I have with my family cannot. I’m more patient with and grateful for them and all that they do for me.”

And in his love and gratitude for his family, Whitby remembers to thank his Heavenly Father and recognize His hand in preserving his life.  “I’ve tried to think of Him more often throughout my day, to admire His hand in all things, and to be grateful for the tender mercies He offers me,” he says. “I don’t think I can ever do enough to show Him how thankful I am. I suppose the only thing that would please Him would be to live up to my covenants, continue to serve in the church and honor my priesthood, and to be the kind of man God would want me to be.”

News From Utah Family Faith Prayer Miracle FamilyFamily,Faith,Prayer,Miracle,Family,News From Utah
Comments and feedback can be sent to feedback@ldsliving.com