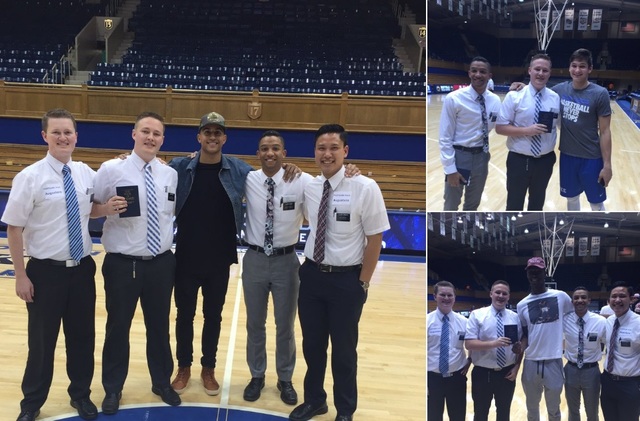 Shortly after Duke's basketball team had a 98-45 victory over Augustana at an exhibition game, LDS missionaries in North Carolina had a special opportunity after the game—to meet the team's stars and share a bit about the gospel.

Frank Jackson, the freshman point guard for Duke and a Latter-day Saint, helped arrange the meeting between the missionaries and his fellow teammates.

Recently, ESPN featured Frank Jackson and how he's breaking down common myths about Mormons. "We don't have multiple wives," Jackson told ESPN. "We don't all have 20 kids. We're not a cult. We're Christians. We're normal. We believe in being good people.''

Jackson continues, "I'm in the spotlight,'' Jackson said. "Everyone is watching us. I can use that as a chance to be a light in the world, in a sense, to show people how I live, and what I believe."

A standard Jackson has lived up to, as shown by this tweet posted by Utah Prospects coach Tim Davis, where you can see four missionaries meeting Duke stars Grayson Allen, Harry Giles, and Frank Jackson.

Frank and the elders teaching the team after a great win :) pic.twitter.com/6zZYnysxSy— Tim Davis (@Prospects2016) November 5, 2016