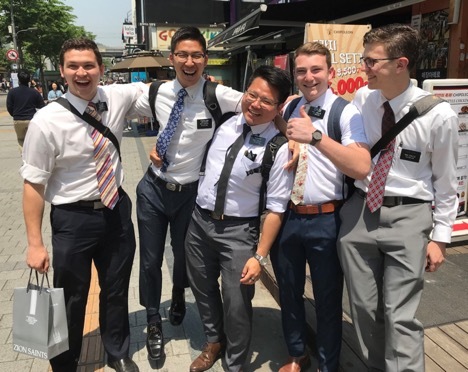 Tragedy struck our mission in South Korea on April 8, 2019.

Elder Euiyoung Beck, a native South Korean missionary serving in the Korea Seoul Mission, suddenly passed out for 20 minutes following a routine military drill weekend (a normal military leave required for Korean young men). In the blink of an eye, this high-energy, much-beloved missionary lost all of his memory from 2015 to the present day.

In addition to every imaginable trial that comes with such an affliction, Elder Beck’s memory loss included one additional, very significant challenge: he had become miraculously converted to the gospel of Jesus Christ in 2016 through an Alma-like conversion story for another day. In fact, back in 2015, he was engaged (by his own telling) in “riotous living” and had been for the prior 16 years. “The last memory I have in my life is getting way too drunk with my army friends at a party back in early 2015,” Elder Beck recalls.

Fast forward to April 2019, the problem now was that everything he had ever known, learned, or experienced about his conversion, his mission, or his testimony was completely erased from his memory.

The doctors confirmed that his body and all other vital functions were 100 percent healthy. There seemed to be no explanation for why this missionary would lose so much of his memory.

Caught in such a bizarre situation, Elder Beck started to counsel with his parents about what he should do next with his life. His assumption was that he was still serving in the military. When his parents informed him that he was currently serving as a full-time missionary for The Church of Jesus Christ of Latter-day Saints, he was shocked. But his parents recall that despite his memory loss, there was a light of Christ in him that caused tears to well up in his eyes. Although he’d been inactive most of his life, it had always been a secret dream of his that someday he’d be close enough to God to be a missionary. This caused him to immediately respond by saying, “If you tell me I’m a missionary, I’d like to get back out to my missionary service!”

One day later, Elder Beck’s amazing parents brought him into the Seoul mission office with faith, hope, and a lot of trepidation as they prepared to send their son back on his mission. There happened to be a training event at the office that day, and about 30 of his fellow missionaries were present when Elder Beck arrived. It’s hard to overstate how much this elder is beloved by his fellow missionaries. He is a spiritual, gregarious, joyful person who is deeply loved by all. One of his companions said, “I think each of us secretly thought that ‘when he sees my face, it’ll surely spark a memory that will open the floodgates.'” That feeling explains why his return to the office that day was so hard. One by one, all of his dear missionary friends greeted him with hugs and high hopes that were quickly dashed as he was a solemn “deer in the headlights,” unable to recognize anyone. The Elder Beck we all knew and loved was just completely gone, and it was so painful.

All of his fellow missionaries desperately wanted to do something. As a mission, we made a giant banner with a picture and a personal note from each missionary in the hopes that their faces and memories would help to stimulate his.

The entire mission also immediately resolved to hold a special mission-wide fast and prayer for him that Sunday.

Elder Beck’s parents suggested that he be placed in a different area because they worried that the members in his current ward would be upset by his inability to remember them; they felt he needed a clean start. My wife and I agreed and placed him in a new area with two patient, loving companions who began re-teaching him everything about the gospel from scratch. They likened it to teaching a young child; accepting and innocent, but also sometimes distracted or lacking focused attention. At times, Elder Beck was right on task and other times, he wandered in a completely different direction. Through it all, his companions and other missionaries near him were kind, long-suffering, and faithfully enduring.

The fasting and prayers continued as the weeks rolled on, but excruciatingly little changed. There was continued deep concern in Seoul. We had removed him from his old ward area, but as word spread of the tragedy, the members of his previous area traveled in large numbers to visit their beloved Elder Beck in his new area, hoping that they might be the ones who could spur his memory. Even people he had been teaching were distraught and started sending him pictures, letters, and even scriptures to inspire some recall. Missionaries called every day in hopes of some sign of progress, but painfully, there was little to report.

About three weeks in, I had my monthly interview with him, and it was heartbreaking. Elder Beck said through a flood of tears, “President, I want to believe and I want to be a good missionary, but it’s so hard when I can’t even remember if God exists.” We talked for a long time. We deeply discussed Alma 32:27, “. . . even if ye can no more than desire to believe, let this desire work in you.” We also studied Elder Holland’s landmark talk “Lord, I Believe,” encouraging him to hold fast to any little thing that he felt might be true. We talked about the “greatness of evidences” (Helaman 5:50) he had received—evidences such as his faithful parents, leaders, missionaries, members, companions, even loving investigators, along with the amazing fruits of the true church that he was witnessing daily in Korea.

At about the four-week mark (which felt like an eternity), we were approaching a quarterly Seoul zone temple day, but Elder Beck remembered nothing about attending the temple. His companions were assigned to teach him all the temple preparation lessons. Their focus was: “Elder Beck is our most important investigator.” They did a beautiful job. He came to the temple well prepared to attend for seemingly the first time. Our missionaries packed every seat in the endowment room, and there was a beautiful, strong spirit present. After the session, my wife and I were waiting anxiously in the celestial room to greet Elder Beck when he arrived. He came into the celestial room with tears flowing and said, “I feel so happy. Heavenly Father is here. I’m home.” He sat in a chair in the celestial room and wept tears of joy. That day in the temple was a miracle: Elder Beck remembered that God lives!

Three days later, Friday, May 10, right at the sound of the 6:30 a.m. alarm, another miracle happened. All of Elder Beck’s lost memories from the last four years came flooding back. He called me right away and through his tears simply said, “President, I remember everything.” There was a joy in his voice that is impossible to describe. My wife and I were in tears. It felt like a son had been raised from the dead. Shortly thereafter, we texted out the news to all of the elated and deeply grateful Seoul missionaries. It was my wife’s birthday. Through tears, she texted out: “Best birthday present ever!”

One by one, as opportunity permitted, Elder Beck had the chance to reunite with each of his fellow missionaries. Watching him shriek with delight and run into the arms of each one of his eternal missionary friends can only be compared to having a glimpse of what it might look like when each of us have a heavenly reunion with loved ones beyond this life’s veil of forgetfulness.

One of my assistants Elder Timothy Alger wrote:

“All of us were part of God's army in the premortal existence and did amazing works (like Elder Beck before he forgot), but once we pass through the veil we can gain false beliefs that we are not anything special. So we must trust in the records and proof (like scriptures and living witnesses) that we are actually sons and daughters of a Heavenly Father with divine potential. We can tap into that potential by having faith in what we can't see with our present eyes, and acting boldly. While on the earth we walk by faith rather than by sight. Thank you, Elder Beck, for your example of faith and action during hard and doubtful times. And to our missionaries: BELIEVE what the prophets say concerning you! We all have divine potential. We love you KSM [Korea Seoul Mission]! You helped Elder Beck remember, now go help others to do the same.”

On this miraculous day, eternal principles such as fasting, prayer, temple, love, deep faith, unfailing charity, and the existence of a loving Heavenly Father became undeniably real in the Korea Seoul Mission.