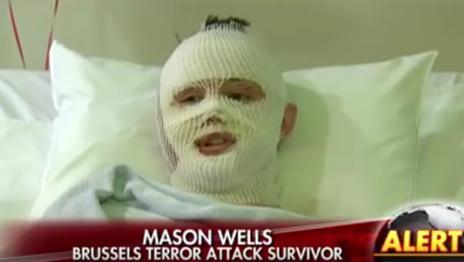 "I was looking down and all of a sudden a huge blast came from my right. . . . My watch on my left hand just disappeared. My left shoe just was blown off. A large part of the right side of my body got really hot and then really cold, and I was covered in a lot of fluids, a lot of blood. A lot of that blood wasn’t mine."

The first explosion lifted Elder Mason Wells off the ground. Seconds later, as he ran for an exit at the Brussels airport, the second blast detonated.

Sitting in a hospital bed with his head wrapped in gauze, Elder Mason Wells gave TV interviews Friday, describing a chaotic, gruesome scene from the terrorist attack that left him covered in blood and caused shrapnel wounds and burns to him and three other Mormon missionaries serious enough that all four have required surgery.

Elder Wells, 19, of Sandy, Utah, who was reunited with his parents on Friday, also told interviewers that despite the attack, his faith in God is intact.