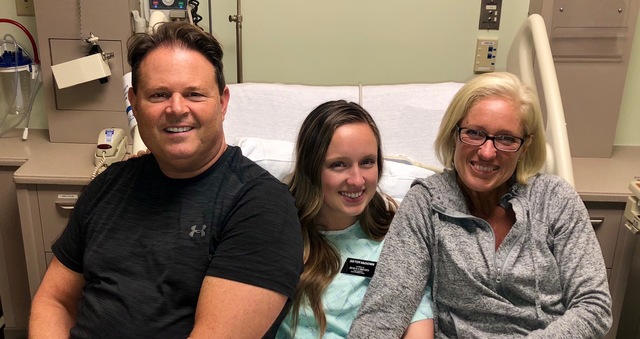 Monique McDown had six months under her belt as a missionary for The Church of Jesus Christ of Latter-day Saints serving in the Brazil Curitiba Mission when, on a Sunday afternoon while walking on a residential street, she heard a car approaching from behind. This was not unusual, but Monique encouraged her companion to join her in scooting over as far as they could to the side of the road. She recalls hearing the car’s engine rev before she was struck by the left front corner of the vehicle. Monique was awake and alert through the entire incident. She made eye contact with the driver before he sped off, never to be seen again.

In the wake of the incident, doctors were unable to find any broken bones in Monique’s body, but the impact of the car left her right leg inexplicably paralyzed. That was nearly 13 months ago. Despite her efforts to stay on her mission, something she loved more than she ever imagined she could, Monique returned home to Flower Mound, Texas, a week and a half after the accident. There she was told by doctors that she might be back to normal within a few weeks, but weeks have turned into months, and, on July 15, 2019, months turned into a year without any movement in her right leg. 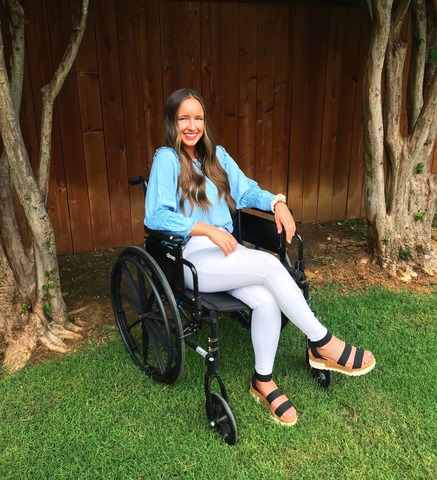 While the accident and her recovery have brought a wide range of emotions for Monique, it has also led to her spending time in the temple reflecting on the good that has come as a result of it and the many ways her life has changed.

We’ve all heard the story of Daniel, Shadrach, Meshach, and Abed-nego and how, after receiving the threat of being thrown into the fiery furnace for refusing to worship false idols, they replied, “If it be so, our God whom we serve is able to deliver us from the burning fiery furnace, and he will deliver us out of thine hand. But if not, we will not serve thy Gods, nor worship the golden image thou has set up” (Daniel 3:17-18).

Several general conference talks have been given about this “But if not” statement, but in the Dallas Texas Temple, Monique prayed a “But if” prayer.

“I just kind of expressed to Heavenly Father that I fully accept who I am,” she says. “I accept that I’m paralyzed, and I will gladly live like this and be like this for the rest of my life if that’s what my plan is. I really had gotten to that point where I’m really happy with who I am. Through this year, I found that closure. . . . So I remember expressing that in my prayer and surrendering and submitting my will completely to His.

“Then, at the end of the prayer, I did say, ‘But if there is a miracle in store for me that it could happen.’”

In the days that followed, she fasted and prayed and did all she could to be ready for a miracle.

On July 31st, Monique posted the following on Facebook, “After one year of being paralyzed and completely losing the ability to walk, I miraculously have begun to regain a small portion of movement and control in my right thigh. . . . To everyone who has been praying for me, I am so thankful for each one of you. Do miracles exist? Yes, and this is proof.”

According to Monique’s family, this response is typical of her attitude and perspective in the year since her accident. But to skip from the beginning to the (current) end of the story would be to skip many of the things Monique has taught others over the past year.

Brazilian Bond Between Mother and Daughter

Monique McDown loved her mission. Her mother is originally from São Paulo, Brazil. Her father served his mission in Brazil, and two of her brothers also served their missions in Brazil, so it was her dream to also serve there. Her mother, however, had some concerns about her daughter serving in Brazil—one of them being traffic. But she also knew her daughter would love the Brazilian people, who she describes as “the most giving and loving” people in the world. And she was right. Monique fell in love with Brazil. 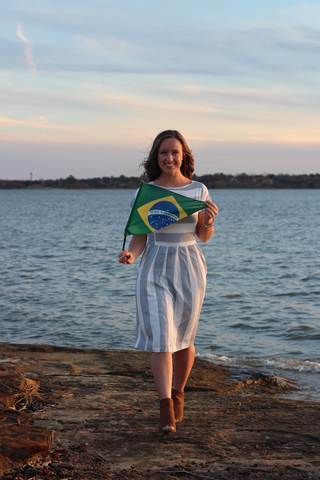 “She said she never thought she would love being in Brazil serving a mission like she did,” Nancy McDown says. “Her expectations were that she knew she would like it because she’s been to Brazil before, and she knew kind of how it was, but it really surprised her how much she loved her mission.”

Her family says that, following her accident, Monique never complained about her injury, but she repeatedly expressed how sad she was to have to leave her mission.

Monique is strong, though. During our interview, her confidence never wavered and she didn’t become emotional. It is clear she has placed her trust in a God she has come to know on an intimate level. However, watching Monique struggle with her injuries has been difficult for those who love her.

“It’s been hard,” Nancy McDown says when asked what it has been like to see her daughter go through this trial. Nancy’s voice begins to crack before she asks, “Are you a mother? . . .

“People don’t know the little things that she cannot do,” Nancy says listing things that have become difficult for Monique including opening doors and sleeping comfortably, adding, however, that watching her daughter go through this has actually been a privilege. “I feel really blessed and lucky to be with her, to see her having to deal with these things and just telling me all the time, ‘It’s okay, Mom. It’s okay that I can’t do this. That’s when I need you.’”

The two, who can be seen holding onto each other’s shoulders in the video of Monique’s recent steps, have formed a special bond since the accident. On September 16th, in honor of Nancy’s birthday, Monique posted on Facebook, “The best part about this picture is a hidden gem that isn’t very visible. Wanting to take a picture with my mom for her birthday but not wanting to use my crutches, my mom pushed the crutches to the side and put her arm around me to hold me. She supported me and held onto me until I was able to hold onto something else. For my entire life my mom has been just that—the person holding me up when I am too weak to stand on my own.” 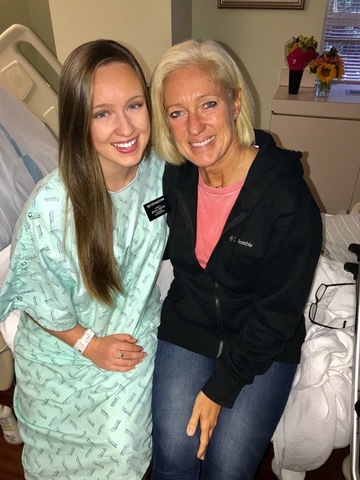 Monique explains that, after becoming paralyzed, she began to feel different about herself. She didn’t feel like a missionary anymore, but she also didn’t feel like who she had been before the accident. She often told her mother that she felt like she was trapped in someone else’s body, but it was her mother who helped her feel like herself.

“She didn’t ever treat me differently. . . . She just was always there to help me,” Monique says. “It’s like the smallest things, like tying my shoes. She would get down, sit with me, and put them on.” Her mother has become Monique’s cheerleader, becoming ecstatic over even the smallest accomplishments.

“We were close before, but now, we are best friends. . . . I almost feel like it’s harder as a parent to watch your kid go through this than it is for the kid to actually experience it,” Monique says. “I know that it’s really hard for her, and she’s told me several times that she wishes she could switch places with me, that she would be in my spot. . . . And you know, I don’t want to experience what one day would be without her.”

When Monique returned home, her stake president, Jonathan Cannon, looked her in the eyes and made a promise, “You will walk again.”

Her father, Chris McDown, who serves as a bishop in the stake, says he has taken comfort in knowing that President Cannon would not have made such a promise if he did not feel inspired to do so. It is a promise that their family has hung onto because, as Chris explains, “We believe and sustain him so much as our stake president.”

Trusting in that promise, Monique has surprised her family with her faith. 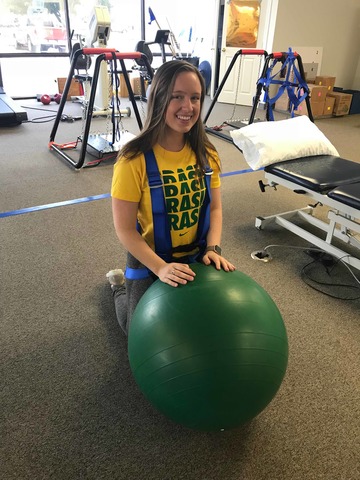 “In the last year, she has taught me about having faith in something that you can’t see and you don’t know if it’s going to happen, but she always knew that things were going to get better. . . . Every single day, there is something that she does or something that she says that is always teaching me to be faithful,” Nancy says.

Her father adds, “We’ve learned because she stayed extremely positive and relied on God and faith and optimism, she’s taught us that these things can make you better, and that’s really been the thing that’s made us the most proud is that it’s made her better.”

Has the Day of Miracles Ceased?

Monique has been frequently warned by doctors to not be fooled by phantom sensations or movements in her leg, but one morning at the end of July, while she was home alone, Monique decided to try to move her leg without the help of her arm. She looked down and noticed that her right thigh actually moved forward a little bit.

“It was just immense joy. I fell to my knees and just started crying and thanking Heavenly Father,” she says.

She remained cautiously optimistic but called her mom and asked her to come home from the gym to see. Together, the two began practicing, placing their arms on each other’s shoulders and taking two or three steps at a time. The practicing continued for a week until Monique finally felt ready to show her siblings and mission president. With her father behind the camera, she and her mom began to show what they had been working on. Still, Monique had not taken a step on her own. But with the camera rolling, she told her mom she wanted to try to take an independent step. She took one and then another and then another. A miracle had been captured on an iPhone.

“It was just an incredible moment,” Monique says. “One that I will never forget for sure.”

The story attracted the attention of several local news stations, all of which shared the good news of a miracle in Flower Mound.

It was Monique’s older sister, Bianca, who encouraged her to share the story with the world. She explains that, in a world full of negativity, she believed her sister’s story had potential to change hearts. Her desire for Monique’s story to be shared was inspired by watching many close to her lose their faith. 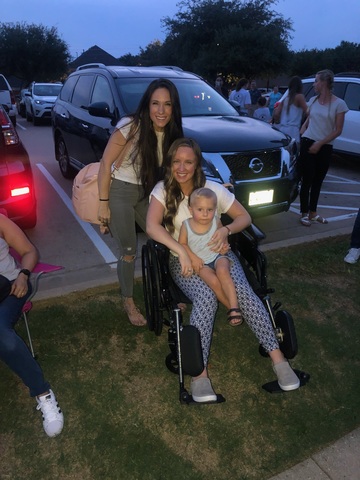 “I know media is a major, major influence on that, and I’ve always been the type that is sometimes quiet because I don’t want to offend someone,” Bianca explains. “But when Monique had the first news reporter [call her], she called [me], and I told her, ‘Get out there. You have to share your story because it is the type that can silence the rest of the world.’

“Her story is the whole foundation of why we’re here. If you can lean on Christ, everything works out, and no doctor could tell you why she’s walking. . . . There’s no medical reason. It was a miracle, but I know that it was a miracle she’s worked for, and that’s because she had Christ as her crutch.”

All Photos Courtesy of Monique McDown.