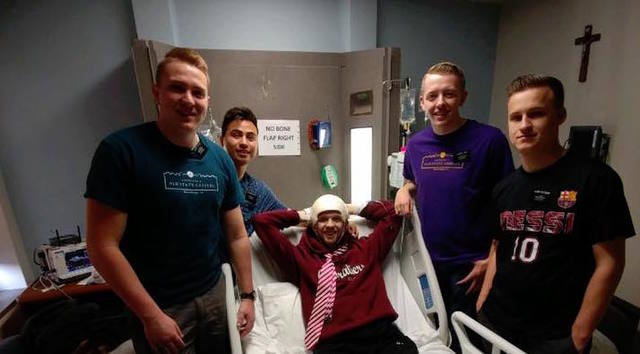 Missionary Hit by Car the Day After Thanksgiving Wakes from Coma, Hopes to Still Finish a Mission

Nearly three weeks after Elder Landon Howe was hit by a car while serving in the Louisiana Baton Rouge Mission, his family reports that he is making great progress with his recovery.

After Elder Howe was struck by a car while riding a bicycle, he suffered three brain bleeds, a punctured lung, broken ribs, and a fractured skull, according to the Hope for Elder Howe Facebook page.

His condition was such that doctors placed him in a medically-induced coma and removed part of his skull to relieve pressure on his brain. He was also placed on a respirator with limitations on how long he could spend in an upright position.

But now, Elder Howe is out of his medically-induced coma and progressing well with his recovery.

Sporting a striped pink tie, a recent post on Elder Howe's Facebook page shows the amazing progress he has made with his recovery in such a short amount of time.

His family provided this update on his condition yesterday:

"His vocabulary is good and he has excellent memory from before the accident and is even getting some short term memory. So far not much anger, but a lot of frustration whenever his head begins to hurt. He did remember this morning that he was in a hospital and has a head injury. Before he kept saying he was in a hotel. I think the physical therapy is going to be hard physically, but he has progressed so fast that we were just talking wondering if tomorrow he would be able to sit up in the chair for 2 hours instead of one."

In an earlier post, the family shared that Elder Howe is intent on continuing to serve as a missionary despite any limitations he may have and was looking into options for serving a mission in Salt Lake City, Blanding, or Elko.

"He just wanted to get out and serve others, even if it meant pushing someone's wheelchair around the hospital halls. He wanted to be able to serve. He is tired of being in bed," Elder Howe's mother wrote on Facebook.