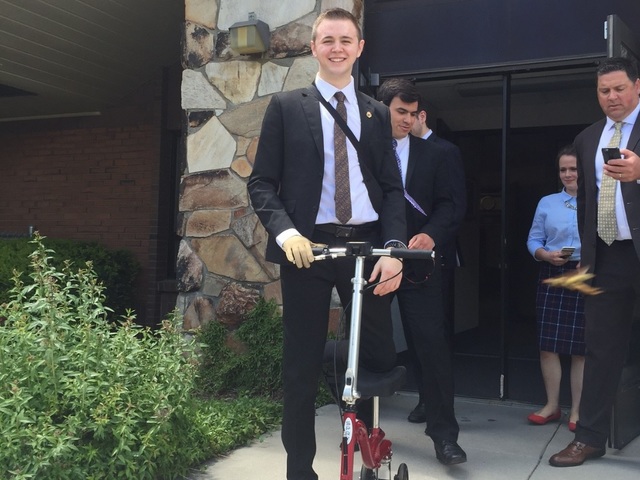 Though a harrowing event that has required surgery and months of recovery, Elder Mason Wells shared that he experienced many blessings after being injured in a terrorist attack in Belgium.

Elder Mason Wells reported his mission in the Pinecrest Ward on Sunday to a packed chapel of friends from both the Sandy area and the Lone Peak community (where he graduated from high school in 2014). He stood to give his address with his left foot in a boot supported by a medical scooter and his right hand in a glove protecting his burns. He will return to the University of Utah Hospital this week for more surgeries on his left ankle.

He started off his 26-minute talk by quoting a friend who said that he had ended his mission “with a bang.” Much of his extemporaneously delivered message was focused on the lessons he learned about faith and conversion.

“A mission is a chance for refinement, and God had a lot of refinement to do with me and He did it,” Mason said.

Mason explained that on the evening of March 21, the Spanish elders he and Elder Empey roomed with in their Brussels apartment were listening to the Face To Face Event with Elder Jeffrey R. Holland. Mason only remembered hearing one sentence from the broadcast — “Heavenly Father will keep every promise made to you.” That line played in Mason’s head the rest of the night.