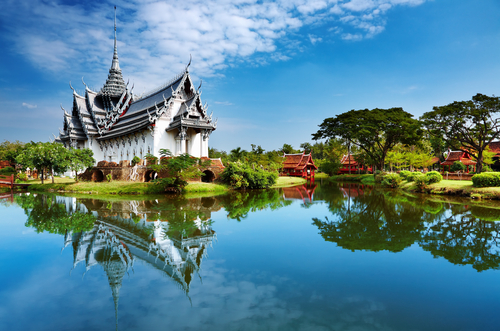 Missionary Work in the "Land of Smiles": A Look at the Church in Thailand

The first Mormon missionary in Thailand was Elder Elam Luddington, sent by Brigham Young in 1854. It was an exciting but short-lived expansion of the gospel into another part of the world—Elder Luddington struggled with the language and returned to Utah only four months after his arrival in Thailand. Latter-day Saints wouldn’t return to the Southeast Asian country until the Vietnam War years, when LDS servicemen and their families entered Thailand.

On November 2, 1966, then-Elder Gordon B. Hinckley dedicated Thailand for the preaching of the gospel. Elder Hinckley, President Marion D. Hanks of the First Council of the Seventy, President Keith E. Garner of the Southern Far East Mission, and a small group of others met early in the morning at a quiet spot in Lumpini Park in the middle of Bangkok to offer the dedicatory prayer.

“We pray that Thy spirit may rest upon this land and this nation,” Elder Hinckley prayed. “Bless those who shall teach Thy gospel, the missionaries who will be sent here, bless them with Thy holy spirit and love for the people among whom they labor.”

Elder Hinckley went on to leave a blessing upon the people of the land that the Spirit would be poured out upon them and that brotherly love would increase as they accepted and partook of the blessings of the gospel. Those blessings continue to manifest themselves among Church members in Thailand.

Vivid colors, overflowing markets, busy farming communities, ancestral shrines, and magnificent celebrations are just some of the things that make Thai culture so interesting and beautiful. With nearly 95 percent of the population identifying themselves as Buddhist, many Thai traditions stem from Buddhist religious ideals and mythical stories, and hundreds of ornate Buddhist temples can be seen throughout busy cities—one on almost every block. Because the people of Thailand are so deeply involved in Buddhist traditions, accepting a new religion can be difficult.

Returned missionary Ryan Tirrell, who served in Thailand, shares, “The challenge among members of the Church in a predominantly Buddhist country is just the challenge of being Christian. I had a native companion who would often tell me that it was difficult being a member or missionary when you’re Thai in Thailand. He explained that while many Thai would be willing to speak with foreign missionaries out of curiosity, they would often turn him away with words of criticism such as, ‘What are you doing? We are Thai. You are Thai. Thai are Buddhist.’”

Tirrell continues, “This challenge also reflects on the great strength and the deep faith of these members. For even in the face of great adversity, they stand and proclaim Christ to their friends and family no matter the price.”

“I’m so grateful to be a member of The Church of Jesus Christ of Latter-day Saints,” says Sathit Kaivalvatana, a member from the Donmuang Ward. “I’m proud to tell everyone that I’m a Mormon. The gospel of Christ has brought me to this point. My life has been changed by just simply following the commandments and applying the principles of the gospel in my daily life.”

Despite the challenges, Buddhist roots have been an influence for good among the Thai people, providing fertile ground for increased gospel knowledge by teaching standards of happiness. Many Buddhist laws are very similar to laws of the gospel, and both Buddhism and Mormonism place an important focus on family and ancestors. Although Buddhism doesn’t necessarily require the keeping of ancestral records, Buddhists do have a natural fondness for and familiarity with those who have passed on before.

“Aspects of the culture, such as meekness and humility, are key Christlike attributes that help people to live the gospel more fully,” says returned missionary Clayton Patterson. “The underlying theme behind all of my favorite exchanges with members is always their humility and their faith.”

That humility and that faith provide sources of joy for Thai Latter-day Saints. Thailand is known as the “land of smiles”— and the members prove it through the love they naturally share with one another.

“After church, there would always be a potluck meal for everyone,” says returned missionary Brad Heap, “and I loved that they would just spend time together each week because they wanted to. It was never a forced thing.” Returned missionary Sofia Belnap says, “Everyone is welcome, but no one is assigned to bring food. The same faithful women and men bring plenty of rice and homemade treats to feed the entire ward and any investigators every week!” 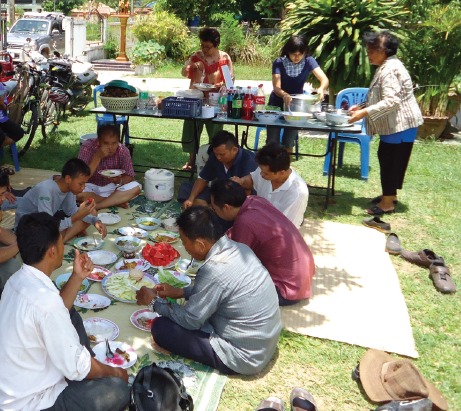 Faith and cultural differences, as well as opposition from nonmember family members, friends, neighbors, and employers, compel Thai members to keep their testimonies strong in order to stay committed to their new faith. And those testimonies bring great faith to the Saints around them.

The Thai Saints love missionary work and enjoy participating with the missionaries. Returned missionary Noah Purser says, “I remember that in my first area of Korat, Nakhon Ratchasima Province, there was a member who would almost every week come up to us and say something like, ‘Elders, I talked to my coworker about the Church, and she is interested! Can you teach her tomorrow?’ They were such good examples to me of showing love and reaching out to others and letting their light ‘so shine’ [Matthew 5:16].”

The gospel of Jesus Christ has blessed members in Thailand by giving them the power to overcome trials. According to Suchat Chaichana, a member of the Sapansung Ward, the gospel has given him the confidence to live through life’s challenges. He says, “I’m not afraid to face the obstacles of life anymore. Life has so much more meaning when we understand its purposes.”

“Jesus Christ is the great Mediator of all mankind,” says Suchitra Siluang, a member from the Bangkhen Ward. “Even sinners like me get the chance to live again and receive happiness in both this life and the next. I try to keep this knowledge in mind by praying and reading the scriptures each day. For, by doing so, I gain miraculous strength, both physically and spiritually.”

The Strength of the Youth

The youth are a great strength to the LDS Church in Thailand. Patterson, who lives in Thailand with his wife, a Thai native, shares his wife’s experience teaching the youth:

“My wife teaches seminary and consistently praises the depth of [the students’] understanding and the diligence of their study. Many live very far from the church [building] and participate via home study programs, where they complete reading and assignments on their own and report via daily phone calls.”

Young men and young women also love to join the missionaries in teaching, inviting, and befriending investigators. Many also are called to serve missions, increasing their faith in Christ and their knowledge of the gospel.

Belnap has seen this frequently. “In every ward in Thailand, there are a handful of university-aged students who spend a majority of their waking hours helping the missionaries,” she says. “These unofficial branch or ward missionaries go out to help the missionaries teach investigators every single day. They bear powerful testimony of their own conversion stories. They share how they were able to work with their families to overcome religious differences and get baptized. They share how they’ve struggled to remain active because of feeling discouraged but were able to overcome that through faith in Jesus Christ.”

Tirrell adds, “The youth often have opportunities to serve alongside the missionaries and assist them in teaching. Many have the chance to learn firsthand what it is like to teach and invite others to come unto Christ as a full-time missionary.”

Part of a Forever Gospel Family

As Thai members come into the Church, they may find the culture to be very different from what they are used to, but they also find acceptance. 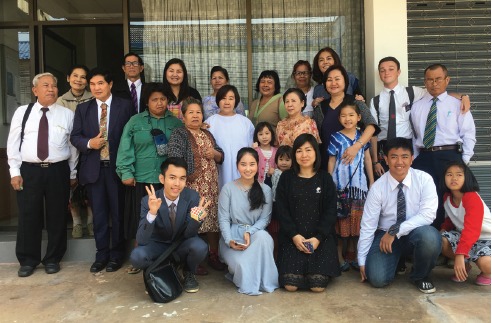 Tirrell says, “The members love the Lord and His gospel. They love the feeling of belonging that comes [with being] a member of His Church. Culturally, the Thai people are already a very family oriented people, and the teachings of the gospel that connect us all as our Heavenly Father’s eternal family resonate deeply with them.”

Feelings of family belonging don’t stop with church attendance, however. Purser remembers the moment when the Saints in Thailand learned that a temple would be built in their country—a crucial step in binding their own families together for eternity. “We couldn’t believe it, and along with all the members, we were dancing and jumping with joy,” he recalls. “It was electric, and all anyone could talk about for the next few months was the temple. Since then, there seems to have been a change in how members approach preparing themselves for temple worship.”

On February 2, 1968, only two years after Elder Hinckley’s remarkable dedicatory prayer, six missionaries arrived at the Don Mueang Airport in Bangkok. The first Church meeting in the Thai language was held on March 17, 1968, and included one of only two Thai members of the Church, along with six investigators.

Since that first Church meeting, the growth of the Church in Thailand has been inspiring, with the creation of the Thailand Bangkok Mission in June 1973, the first translation of the Book of Mormon into Thai published in 1976, the creation of the first stake in Thailand by Elder Neal A. Maxwell and Elder K. Y. Tai in June 1995, and the announcement of the Bangkok Thailand Temple during the April 2015 general conference. In less than 50 years, the Church has blossomed from 2 Thai members to 22,000 members, 4 stakes, and 172 missionaries.

“I have the opportunity to work with a number of local leaders,” says Patterson, “and in our district, two branch presidents are new members of about two years. Two others have been members about five years. One other is a recently returned missionary. When I see the growth that they and others have achieved, I feel very, very good about the progress of the Church in Thailand.”