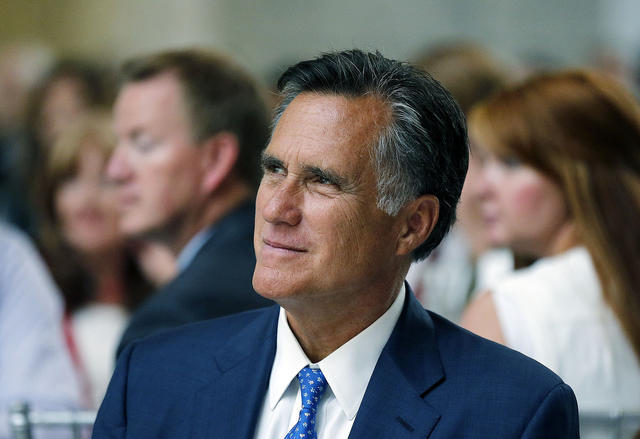 Mitt 2016? Many Looking to Romney to 'Save' Republican Party with Candidacy

MR says: With controversial candidates rising in the national polls, many Republicans are looking to Mitt Romney to help "save" the party and heal its divisions. But, will Romney consider running again?

Mitt Romney barely paused last week while making the rounds during a recent reception in the Capitol rotunda when reporters attempted to ask him about speculation he could make a third run for the White House.

"You can ask, but I won’t answer,” Romney said before moving on to mingle with some of the state's most powerful people, there to celebrate his close friend, Kem Gardner, the namesake of a new University of Utah public policy institute.

"Mitt wants to run. He never stopped wanting to run," a senior member of Romney's 2012 team reportedly told New York magazine's Gabriel Sherman in an article that describes the prospect of a Romney run as "exceedingly slim."

The National Review quoted Romney donors unwilling to contribute to any of the 17 announced GOP candidates, including Dr. Greggory DeVore of California, whose car sports bumper stickers reading, "Romney 2016, I told you so — let's fix it."

Longtime Romney supporter Kirk Jowers, the former head of the University of Utah's Hinckley Institute of Politics, said seeing Trump rise to the top of national polls has plenty of Republicans pining for Romney.