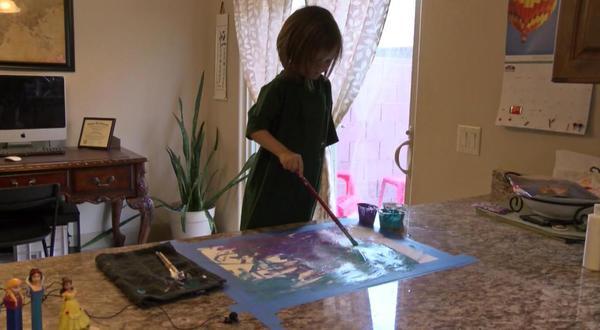 MR says: You've got to appreciate the determination of this inspiring little girl. Not only has she become an entrepreneur by selling her paintings internationally, she also has her own debit card!

Hear that Eva? Walt Disney thinks you can do it.Posted by Art by 3valynn on Sunday, September 20, 2015

“This time, for some reason, I decided to respond to her like she was an adult,” Kaitlin Sorensen said. “I said, 'Well, we can’t afford to do that. How would you help us do that?' And her first suggestion was, 'Make pictures.'"

Wow! 200 "likes"! Go Eva! I don't suppose some of those followers would love to be the owners of original 3valynn paintings. Help Eva reach her goal by sharing her story.Posted by Art by 3valynn on Sunday, October 18, 2015

"Party Balloons" by EvalynnOriginal is = COMMISSIONED The stamping technique is definitely Eva's favorite to do.

Lead image from Deseret News. Other images from Art by 3valynn Facebook page.