Note: I review for artistry, content, and worthwhile messages. The letter grade is a reflection of entertainment value and is not necessarily a moral endorsement of the film. I break down content as best I can so readers can make their own decisions about seeing a film. I share Gospel parallels for those who use cinema to kick-start discussion as my parents did.

With the blessing of Tony Stark (Iron Man), Peter Parker tries to prove himself a hero while juggling a social and academic life.

One would think rebooting Spider-Man for the third time in 15 years would lead to a stale, uninspired retread, but Marvel Studios consistently defies expectations by giving us characters, situations, and narrative threads we’ve never seen before. Spider-Man: Homecoming is fresh, funny, and joyful, with just enough menace by a brilliant Michael Keaton (as a villain with unique motives) to give the film some weight. Tom Holland brilliantly captures Peter Parker’s youthful exuberance, naivety, and the weight of responsibility which he carries as the film goes on. The diverse cast of supporting characters delights. The jokes land, the action pops, the soundtrack is a toe-tapping delight, and the film captures high school angst in all its awkward glory. The tie-ins to the rest of the Marvel universe add some flavor but do not overshadow the fact that this is Spidey’s film. This flick is non-stop fun.

Spider-Man: Homecoming is rated PG-13. Like most Marvel movies, it has moderate profanity scattered throughout (s-words, SOBS, etc) as well as one incomplete f-word that’s comedically interrupted. A teenage boy is seen shirtless when he gets into (and out of) his Spider-Man suit. A teenage girl is seen in a one-piece bathing suit. A teenage boy lies to his teacher, telling her he’s using a computer to “look at porn” (he’s not, he’s actually helping Spider-Man but doesn’t want to reveal that). As is common with these films. there’s plentiful action violence with fighting, a villain incinerating a person with a ray gun, and civilians in peril.

Pride and arrogance can lead to huge mistakes (see Proverbs 16:18-19). Love your enemies and do all you can to save and redeem them (see Matthew 5:44). Before aspiring to greater roles and responsibilities, be content with your current situation and do as much good as you can there (see Alma 29:1-3). 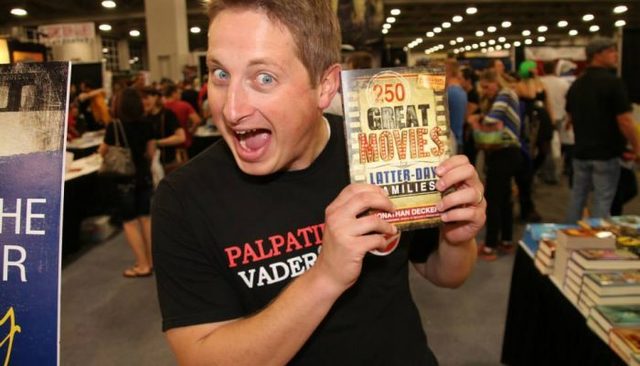 For my recommendations of films for all ages check out my book 250 Great Movies for Latter-day Families, now available in paperback and Kindle. Visit www.yourfamilyexpert.com for more of my reviews as well as my relationship tips as a licensed marriage and family therapist. If you’re going to BYU Education Week come say hello at my class “Stepfamilies and Adopted Families in the Gospel.”