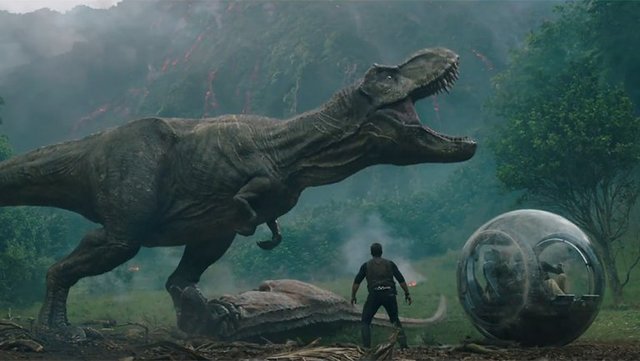 Mormon Moviegoers Review: What Parents Need to Know About "Jurassic World: Fallen Kingdom" Before Seeing It with Their Family

The Jurassic Park franchise has been going strong now for twenty-five years (hard to believe).  Like any franchise, the entries can range from series highs (Jurassic Park) to series lows (Jurassic Park III).  Fortunately, 2015’s Jurassic World revived the franchise after a fourteen-year lapse and gave viewers a thrilling, two-hour ride and ended up being one of the highest grossing hits of the year. How does Jurassic World: Fallen Kingdom compare to its predecessor?

When we last left Jurassic World, the dinosaurs were left to their own devices after a series of disastrous events led to the collapse of the “Dino Disney World”.  Fast forward to 3 years later and the dinosaur inhabited island of Isla Nublar is on the brink of a cataclysmic extinction level event. On Capitol Hill, Congress debates whether to intervene and save the dinosaurs by relocating them to another island, while Claire Dearing (Bryce Dallas Howard), now the head of a “save the dinosaurs” organization, is trying to save the creatures from their impending doom.

A mysterious benefactor takes up Claire’s cause but the hitch is that she must be able to convince her ex-boyfriend, Owen (Chris Pratt), to join the expedition and help wrangle one of the Velociraptors.  Of course things don’t turn out to be what they really are and the set up for the “main” narrative begins.

At the time of this writing I have now seen Fallen Kingdom twice (it was released in the UK on 6 June) and it’s plain to see I was practically looking at two different movies. The film starts off as your typical disaster movie and then the film wastes no time transitioning into to a cautionary, environmental tale, but with dinosaurs, of course.  If viewers can get past story issues, the film delivers another entertaining entry in the series. The set pieces are genuinely thrilling and the finale throws in everything but the kitchen sink.

My biggest gripe with the film is a subplot that is introduced but then quickly ignored for the remainder of the picture. The performances are lacking, even from respectable leads, but no one watches these films for the acting. For those thinking that Jeff Goldblum’s Ian Malcom (from the first two films) is a part of the main action, prepare to be disappointed. In terms of “dino action,” there are plenty of moments to keep viewers engaged without losing them.

When it comes to the case of whether to 3D or not to 3D, one can go either way, although the former viewing option does add depth to some of the more subtle moments and moderate doses of the 3rd dimension during some of the bigger scenes.

Overall, the latest entry is not the most memorable film, but it is one worth visiting and does take the series in a new and exciting direction.

Jurassic World: Fallen Kingdom is rated PG-13 for intense sequences of science-fiction violence and peril.  Plenty of explosions in this entry, but the biggest acts of violence come from the obligatory sequences of the dinos attacking humans.  The onscreen/off screen violence is not necessarily graphic, but is intense. There is one scene where an arm is ripped off, and there is blood splattered on a wall.  One man is dropped from a high distance but this is not graphic in itself. Profanity is present, but mostly mild, and a moment where the Lord’s name is taken in vain. No sex or nudity, but mild cleavage is present.

The Jurassic Park series has always dealt with the ethical question and moral ramifications of resurrecting extinct creatures. While there are many benefits to scientific breakthroughs, especially in the field of genetics, how far should man push the boundaries of science? Although we are made in Heavenly Father’s image should we create life in a test tube? Those are the questions viewers will most likely ask themselves.

Justin Lozada is a financial systems instructor for the United States Air Force. He reviews Hollywood films at Letterboxd.