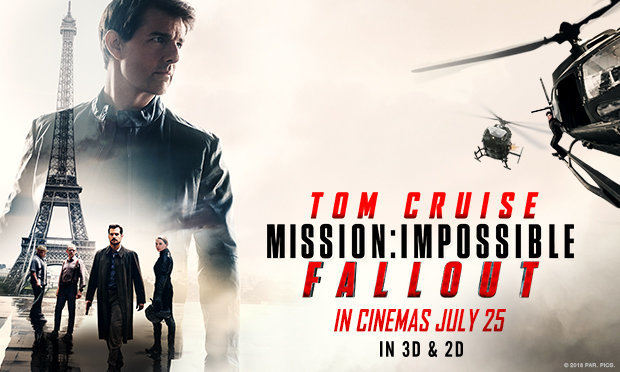 Mormon Moviegoers Review: What Parents Need to Know About "Mission Impossible: Fallout" Before Seeing it with Their Family

After 22 years and over the course of five films, one would think the Mission: Impossible film franchise would be running on fumes by now. Fans of the franchise can rest assured that is definitely not the case as the latest offering; Mission: Impossible–Fallout makes its way to the multiplex. Fallout is the culmination of events that started in the previous entry, Rogue Nation; a love letter to the city of Paris; and also a celebration of the Paramount Pictures’ franchise. How does the latest picture stack up? I can report that it is the best of the series, and your mission, should you choose to accept it, is to make sure you catch Fallout on the biggest screen you can find.

The film kicks off with a bang and one of the best opening sequences, which is very reminiscent of the first film’s pre-title sequence. After taking down the Syndicate and their leader, IMF agent Ethan Hunt is pushed to his limits in his latest mission. When a black market deal goes south, and a hard sacrifice cannot be made, three nuclear orbs end up in the open, and now the CIA has sent their number one man (a very excellent Henry Cavill) to make sure they’re recovered before the worst case scenario can happen. An elaborate plot is set into motion, one that will cause Ethan to cross paths with Lane and MI6 agent Ilsa Faust. From a back alley in Berlin to the streets of Paris and London and to the highest peaks of Kashmir, the picture is firing on all cylinders and everyone has brought their A-game.

It would be unfair to label Fallout as a direct sequel to the previous film, but it is definitely the bookend to a storyline with a very satisfying finale. The narrative is a lot more focused and even at 147 minutes is still lean and nimble. What I loved most about the picture is how it transcends its genre and ends up being much more than just another formulaic entry. The stakes are much higher and all of the players understand that, and they are fully invested. Tom Cruise is on full “cruise” control here and he does not let the audience down at any point. The returning supporting cast that includes longtime series regular Ving Rhames along with Simon Pegg, Hunt’s IMF comrades, step up and are fully visible and hold their own. Rebecca Ferguson’s character has arched in surprising ways and is amazing to watch, but Henry Cavill is the real surprise here. His physical presence is hulking and intimidating in every scene he is in. Angela Bassett is in command as the CIA chief and Alec Baldwin’s IMF secretary plays a much larger, paternal role.

The action sequences are quite fun, but also much more intense and brutal at times. The film has so many standout sequences it’s hard for me to pick a favorite, but the last 30 minutes throw in everything, including the kitchen sink. The production is much bigger and the film’s photography immerses and envelops the audience from beginning to end. The film is shown in the IMAX format and does include 26 percent more picture information and, in a first for the franchise, does also include a 3D version (although from what I did see, it does not look like it was filmed with 3D in mind and might be an underwhelming presentation).

At this point, the most impossible mission after this is to find a way to top what is easily the high point of the series. Knowing Tom Cruise, I’m sure he’ll find a way to take the audience to new, dizzying heights.

Is It Ok for Your Kids?

Mission: Impossible–Fallout is rated PG-13 for violence and intense sequences of action, and for brief, strong language. The keyword in that description is “intense.” The fist fights are much more brutal, the sounds of gunshots reverberate, and the sound effects are accented for maximum impact. In short, I do not recommend viewing for children under 13. This is not Marvel Cinematic Universe violence. A character gets shot in the head (the impact is off-screen) and there is a huge pool of blood as a result. People are stabbed and beaten in brutal fashion, and the finale borders on graphic at times. Use of profanity is infrequent, particularly the “S” word, and there is one use of the “F” word. There is no nudity or sensuality present.