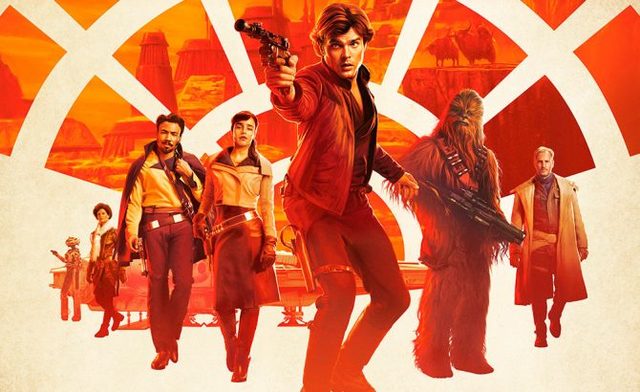 Mormon Moviegoers Review: What Parents Need to Know About "Solo" Before Seeing It with Their Family

A young Han Solo joins a group of galactic smugglers in an attempt to earn enough money to buy his own spaceship. Along the way he meets Chewbacca, the 196-year-old Wookie we all love, and Lando Calrissian.

Creating an engaging origin story for a character that has been around for decades (and has already died in a previous installment) couldn’t have been an easy task. Creating stakes that are high enough for the movie-goers to remain engaged proves to be a difficult task for the cast and crew. As a result, Solo suffers from a lack of cohesiveness that it doesn’t really recover from, though it does finally manage to get off the ground with the introduction of Lando Calrissian.

While the new characters introduced in this movie (specifically Emilia Clark as Qi’ra and Woody Harrelson as Beckett) aren’t groundbreaking or even particularly interesting, the performances are fine and I was engaged in the ending. Alden Ehrenreich (Hail, Caesar!, Beautiful Creatures) leads this origin story as the young Han Solo, and while he does a respectable job (and he tries valiantly), he doesn’t quite fill the shoes left behind ny Harrison Ford (but then again, is there really anyone who could?). However, Donald Glover (Spider-Man: Homecoming, The Martian) as Lando Calrissian was delightful and one of the best parts of the movie.

Bottom line: while this movie ends up being a fun ride, it doesn’t add anything new or exciting to the already existing franchise (and several beloved characters), and because of this I believe fans of the Star Wars universe will leave disappointed.

Is It Okay for Kids?

Solo is rated PG-13 for sequences of sci-fi action/violence. There are several action scenes with both large-scale (warfare between the Empire and the resistance) and small-scale (smaller fights between two or three characters) fighting, though there is not much blood shown. (Spoiler alert!) A few supporting characters are killed on screen. There are a few on-screen kisses. The d-word and the h-word are used several times. Drinking and gambling take place in several scenes as well. There are a few innuendos, including one about a love affair between a man and an android.

The importance of teamwork and courage are the prevalent themes in this film, and it also explores the subject of free will (see D&C 58:27), with morally ambiguous characters and their ability to choose to do what is right. “Let us—all of us—have the courage to defy the consensus, the courage to stand for principle” (Thomas S. Monson, “Be Strong and Of A Good Courage” April 2014).

Lindsi currently works for BYU in the Theatre and Media Arts department and is a freelance technical director and stage manager for several theatre companies in the Utah Valley area. In her free time, she loves photography, stand up paddle-boarding, running 5k’s, reading, spoiling her nieces and nephews, and (you guessed it!) watching movies. For more of Lindsi’s writing visit lindsimichellephotography.blogspot.com.