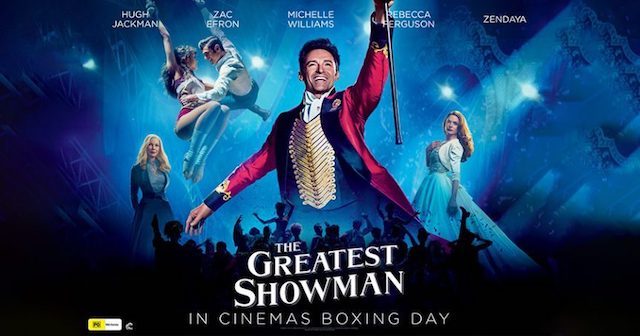 Mormon Moviegoers: What Parents Need to Know About "The Greatest Showman" Before Seeing It with Their Family

What's The Greatest Showman about?

The Greatest Showman is an original musical loosely based on the life of P.T. Barnum and his inspiration for the show that would eventually become a worldwide sensation.

The Greatest Showman seeks to dazzle its audience with an enthusiastic outpouring of music, costumes, energy, and romance, and to its credit, it very nearly succeeds. Hugh Jackman (X-Men), leads the cast as the optimistic dreamer P.T. Barnum, trying his hardest to provide his wife with the life he believes she deserves, while simultaneously proving to the world that he belongs in the highest levels of society.

Jackman shines in this role. His acting, singing, and dancing lend an energy to the movie that drives it forward through both the great scenes and the rough ones. However, the supporting cast is what truly gives this musical its heart. Zach Efron (High School Musical) and Zendaya (Spiderman: Homecoming) have incredible chemistry and give this movie a romantic spirit that could have been a whole other movie in and of itself.

The cast is rounded out by Michelle Williams (Manchester by the Sea, Oz the Great and Powerful) as Barmun’s wife and childhood love, Rebecca Ferguson as Jenny Lind, Keala Settle as Lettie Lutz (the bearded woman), and several other fantastically talented individuals who make up Barnum’s group of unorthodox performers.

To its credit, the music is wonderful. Well written and performed, I was singing it as I left the theatre and as I was driving home, and I’m listening to the soundtrack right now. It doesn’t lose its charm after you leave the theater, which is a feat that is harder to achieve than you’d think.

That being said, this movie isn’t perfect. It’s very fun, but it’s also formulaic. Everything is just a bit too glossy to seem real, and therein lies the movie’s biggest problem: it trades in historical accuracy and complexity for an overtly synthetic version of the real-life story.

This movie is rated PG for thematic elements. There is some violence in the movie, including a point where a young boy gets slapped and a larger brawl that ends with someone being severely injured. A married couple kisses passionately a few times. The language in this movie includes a few D words, G words, and a racial slur that is used once. Themes of racism and bullying are prevalent throughout the film.

This movie encourages tolerance and love of differences, such as differences in race, class, and disability. It teaches that no one was born a mistake, and that differences are advantages. Themes of love between different people are also an important part of the movie, as well as how that love effects them, the people around them, and society as a whole. (See “The Love of God,” President Dieter F. Uchtdorf, “The Tongue Can Be A Sharp Sword,” Marvin J. Ashton; Matt. 22:36-40)

For another musical with soul and substance, we recommend Fiddler on the Roof!

Lindsi currently works for BYU in the Theatre and Media Arts department, and is a freelance technical director and stage manager for several theatre companies in the Utah Valley area. In her free time she loves photography, stand up paddle-boarding, running 5k’s, reading, spoiling her nieces and nephews, and (you guessed it!) watching movies. For more of Lindsi’s writing visit lindsimichellephotography.blogspot.com.