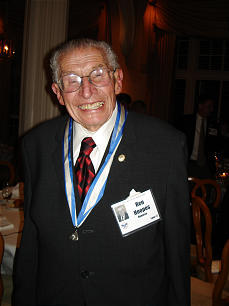 Lornenzo "Ren" N. Hoopes, at age 97, received the 2010 Spirit of Scouting Award from the San Francisco Bay Area Council of the Boy Scouts of America on Saturday, Oct. 9. The award recognized his 84 years in Scouting.

More that 250 guests attended the award ceremony at the Claremont Country Club in Oakland including Elder L. Whitney Clayton of the Presidency of the Seventy, religious leaders of other faiths and members of the community.

In accepting the Spirit of Scouting award, he said, "What I have given to Scouting pales in comparison to what Scouting has done for me."