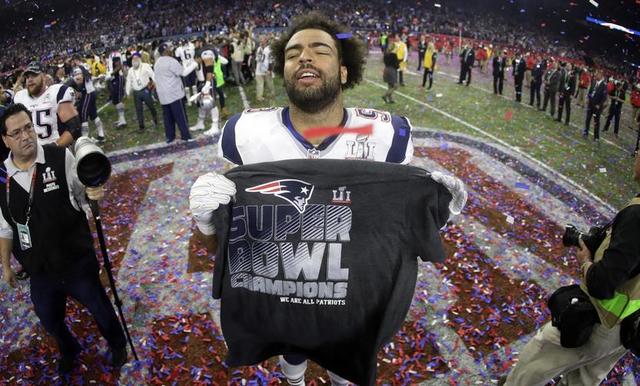 After an incredible comeback for the New England Patriots, beating the Atlanta Falcons 34-28 in overtime, Mormon Super Bowl champion and former BYU star Kyle Van Noy is counting his blessings.

Van Noy came out of Sunday's game in awe as he answered questions from interviewers. When asked about the game he told the Detroit Free Press, "I'm just so blessed."

Throughout the video interview, Van Noy gave credit to the team and players who worked hard in the game and who made it all possible. Even when asked about his quarterback sack, he said it was "a team effort."

The Patriots were down at half 21-3, but then came back to score 31 points to make it a 34-28 win. Van Noy made a critical play late in the third quarter, splitting a sack with Trey Flowers and getting the Patriots another chance with the ball.

The sack allowed the Patriots to get a field goal during the following drive, bringing the Patriots' deficit to only 16 points. The rest of the game was all unanswered points from the Patriots, including a successful touchdown and two-point conversion in the final seconds of regulation play to tie it up.

Van Noy is early in his career and knows that he has plenty more to give. After two and half years of struggle in the NFL, he believes it's "all for a reason" and that "this is just the beginning," he told Detroit Free Press.