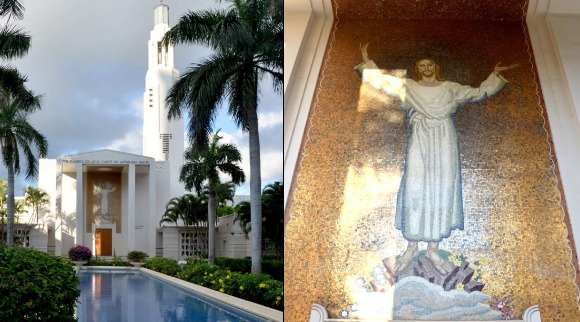 As we honor the 75th anniversary of the attack on Pearl Harbor, we remember those who passed away as well as those who survived, many of whom found refuge in an LDS tabernacle.

On Sunday, Aug. 17, 1941, thousands of Mormons gathered on a stunning city square less than 10 miles from Pearl Harbor to dedicate what would be the last tabernacle the LDS Church would ever build. . . .

Its illuminated, 141-foot-high bell tower made the Mormon edifice the second tallest in Honolulu — and visible across the city.

There, amid the rising global tensions, these Mormon faithful were comforted when David O. McKay—then a counselor in the faith's governing First Presidency who, a decade later, would become the ninth president of The Church of Jesus Christ of Latter-day Saints — offered a message of hope and survival in his dedication.

McKay "specifically prayed that the tabernacle would be preserved from missiles in the event of any war," Matthew O. Richardson writes in a volume of Brigham Young University essays about Latter-day Saints in the Pacific.