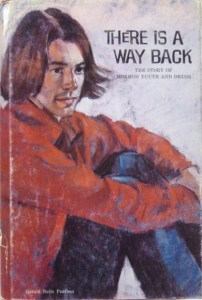 A long time ago I read a book that profoundly influenced my life. It seems I start a lot of my blog posts this way, but it’s true. Reading can do that for you. This one was by Gerald Neils Pearson. You may recognize the name. He was the husband of Carol Lynn Pearson. Gerald was gay and died of aids in 1984. Carol wrote about him in her 1986 autobiography, Goodbye, I Love You.

The book was published in 1970. I picked it up at my California LDS Bookstore, Ellsworth’s Stationers back when they had a store in Baldwin Park CA, probably in early 1974. The year 1973 was not a good one for me. I got involved in drugs for about six months (mostly marijuana and LSD once or twice), was kicked out of High School and got badly beat up by my best friend.

I got religion big time in 1974, meaning I tried to do everything I had been taught I was supposed to do as I was growing up in the Mormon Church. It’s not that I was a bad kid when I was young, I just didn’t “get it.” That all changed with my, shall we say, “unfortunate” experiences of 1973. There’s no doubt about it. I made some bad choices, regretted them then and have ever since.

Read the rest of this story at latterdaycommentary.com