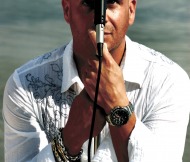 John Moyer found success in movies by talking about his trials.

Moyer was a young Brigham Young University film student in the early '90s, and handling a divorce two years into his marriage.

He found solace in an open-mic night at a Provo comedy club.

"You have to go through a lot of dysfunction in life," said Moyer, in a phone interview in advance of four Ogden shows next weekend. "And when you do that, you go, 'Oh, I think I am going to talk about this.' "

Moyer was asked to return to the comedy club the following weekend. A stand-up career had started -- one that has stuck with him for more than 15 years.
Read the rest of this story at standard.net