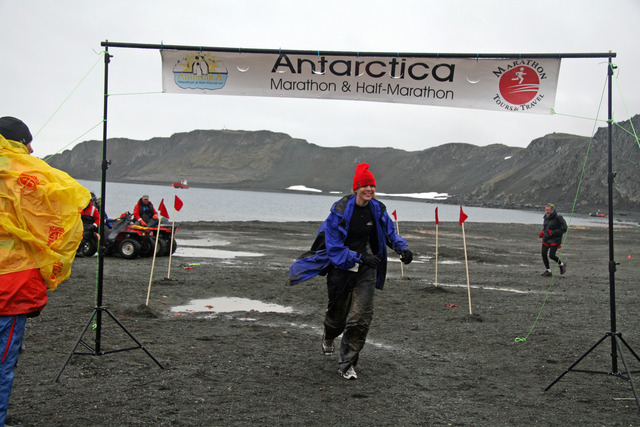 “Antarctica was the hardest one, just because of the elements,” Purdie said. “I was freezing and it was blizzard-like conditions.” Those conditions included three miles of complete ice, mud puddles a foot deep, freezing rain, attacking birds, 40-mph winds and no water or nutrition stations for aid. The race took her six hours and 44 minutes, a far cry from her usual four-hour marathon.

Her favorite marathon was on the Great Wall of China.

“A lot of people came out of their villages to support us, and they were all taking our picture, which I found kind of strange—why would they want to take my picture?—but they just thought what we were doing was cool,” she said.

Purdie also completed an Ironman triathlon in Nov. 2009. So what compels someone to push so hard to limits that most of us don’t even think our bodies are capable of?

“I’m a really competitive person by nature, so I really like the fact that I can do some kind of competition as an adult.”

Besides fulfilling her competitive tendencies, running marathons has helped Purdie to develop personally in other areas as well.

“I’ve learned how to be more self-sufficient. I’ve always been really introverted, but I’ve done a lot of traveling by myself [because of the marathons], and so I’ve had to be a lot more extroverted. I’ve learned how to talk to strangers, how to ask for help … It’s really taken me outside myself.”

Her goal to run a marathon on all seven continents grew naturally out of her love for both traveling and running.

“The marathons are great running tours of the city,” Purdie said. “I always bring a camera with me on the marathon. We get to see parts of the city that the normal tourist wouldn’t ever see.”

Purdie usually runs about 40 miles per week, in addition to biking, swimming and weight training. For the Ironman, she trained even harder: 20 hours a week for four months.

“I just get up early and train, and then I go to work, and then I come home in the evening and train. So I have to be really committed to it.”

Sound like a lot of work? For those who aren’t already die-hard athletes like her, there’s still hope to improve now.

“I ran track when I was much younger, but I can’t say I was very good at it,” she said. “It wasn’t until I was an adult that I started to pick up marathons, basically because I wanted to get in really good shape.” Now, she has competed in 30 marathons and half marathons and completed 20 triathlons.

Purdie has advice to share for all the other aspiring marathoners out there:

And, of course, rely on the Lord.

“I always pray. Some of these races have been so hard physically, that I always end up praying in the race,” Purdie said, getting choked up. “It just makes such a difference to know that you can turn to the Lord for help.”

Most recently, she ran a race in South Africa. Extreme stomach pains were making it difficult for her to run. “So I just prayed, and the pain went away, and I was able to keep running,” Purdie said.

Now Purdie's goal is to do it all over again.

"I want to run a marathon again on all seven continents, but I'm going to take different ways," she said. "That way, I get to see more of the world."