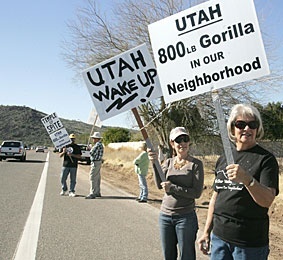 Neighbors of a planned Mormon temple in north Phoenix are protesting at the site, saying Utah's leadership is ignoring their concerns about the building's design, light and traffic.

The Church of Jesus Christ of Latter-day Saints wants to build a 26,000-square-foot Phoenix Temple at 5200 W. Pinnacle Peak Road. The church is seeking a building permit from Phoenix.

About 70 people, many of them members of the Phoenix Property Rights Coalition, have been protesting to get the attention of the church's main office in Salt Lake City.

The residents say the decisions about the temple are decided there.

During a late January protest, the group placed a 27-foot-tall inflatable gorilla with a message: "Utah: The 800lb Gorilla in our Neighborhood." They have been calling the project the "Temple of ill will" because when the church redesigned the building in August, it came back with an even larger structure, said Scott Anderson, a neighborhood organizer.

Church officials said leaders in Arizona and Utah work closely on all matters related to the temple, including the concerns raised by the neighbors.

Read the rest of this story at azcentral.com