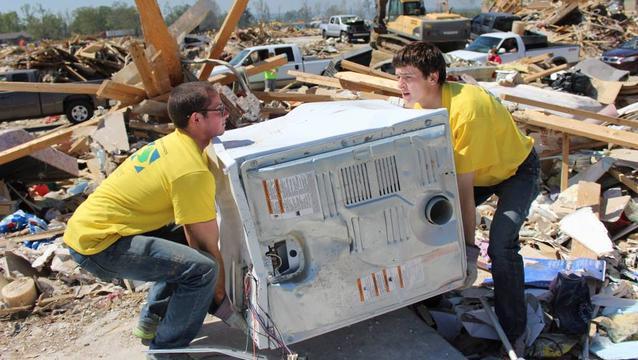 Hundreds of Mormon Helping Hands volunteers gathered in central Arkansas on Saturday, 3 May 2014, to help clean up debris in communities devastated by recent tornadoes. Storms tore through the area on 27 April, destroying hundreds of homes and businesses in the communities of Vilonia, Mayflower and surrounding towns. Local Church leaders estimate it will take weeks to clear all of the tornado debris in Arkansas.

Fifteen people were killed and more than 150 people were injured when the deadly tornadoes hit the southeastern United States, including a 31-year-old Latter-day Saint father who died when he was struck by some wood while shielding his daughter. His wife and two daughters survived. The twister was a category EF4, with winds of at least 180 mph.