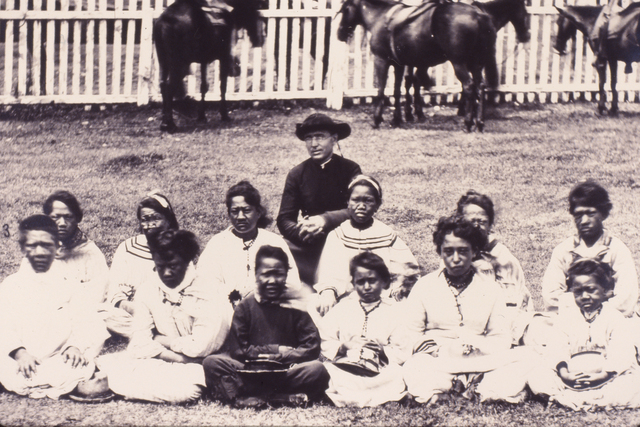 "They Called It Hell, and We Called It Heaven": The Story of Exiled Saints in Kalaupapa Leprosy Settlement

Soon after their arrival at the settlement, Napela and Father Damien became acquainted. The two men became dear friends, despite the fact that Father Damien was 27 years younger than Napela, from a very different cultural background, and a committed leader of a different faith. In fact, one of their contemporaries who lived at Kalaupapa wrote, “After Father Damien arrived in the Leper Settlement . . . Mr. J. Napela . . . and Father Damien were the best of friends.”

What makes this particularly unusual is that at this time in Hawaii, heated rivalries existed between faiths as they vied for island converts. But at Kalaupapa, there seems to have developed a different kind of spiritual terrain, nourished by the relationship between these two great men and their commitment to improve the deprived conditions they encountered upon their arrival at the settlement. Both had come to Kalaupapa to serve, and in the end, both contracted leprosy as a result of their intimate service and charity.

FINDING HEAVEN IN AN EARTHLY HELL

It appears that through the influence of Napela, Father Damien, and a number of other devoted Christians, the community began to be transformed. Over the years, Kalaupapa softened under the strain of shared suffering. Bernard, a former patient, noted that Kalaupapa used to be viewed as “a devil’s island, a gateway to hell, worse than a prison.” Yet he added, “It is a gateway to heaven. There is a spirituality to the place. All the suffering of those whose blood has touched the land—the effect is so powerful even the rain cannot wash it away.” LDS patient Makia Malo noted, “They called it hell, and we called it heaven.”

Some patients related how their testimonies of prayer were strengthened as a result of their experience at Kalaupapa. For example, Protestant member Nancy Talino related, “We were nurtured. . . . Not just by a Protestant or a Mormon or even Catholic nuns. Everyone worked together. . . . Everyone needed prayers; there were prayers. And I was thankful that I was very close, very close to God.” A Catholic patient who came to Kalaupapa at age 14 in 1936 also shared her experience of prayer and the importance of expressing gratitude to God, even in times of adversity: “God knows best for us. . . . You must keep your faith no matter what comes into your life. . . . I feel religion is not thanking God when everything is good; religion is thanking God when everything isn’t going right.”

This relationship with the heavens seems to have also affected the relationships among the patients themselves. Several people who have had contact with the Kalaupapa patients have been amazed by the unifying effects of suffering from the same disease. For example, in his book Travels to Hawaii, Robert Louis Stevenson wrote of his visit to Kalaupapa, explaining, “They were strangers to each other, collected by common calamity.” Protestant writer Ethel H. Damon noted, “Surely the isolation of suffering has tended toward obliterating the barriers in religious observance.” Reverend James Drew observed, “They are brothers and sisters here. . . .Leprosy has made sure of that.”

Asian patient Paul Harada echoed this same theme: “The more suffering, the closer we are together. . . . We are all friends here.”

In a number of interviews conducted over the past years, signs of the unifying culture of Kalaupapa abound.

Latter-day Saint Kuulei Bell related that several times she was recruited to sing in the Catholic choir.

Richard Marks—a former patient, a Catholic, and sheriff of Kalaupapa for nearly two decades—boasted of his unusual record of having made no arrests in his time as sheriff. In describing the Catholic mass in Kalaupapa at Christmastime, Marks recalled, “The Protestants and the Mormons came early, and they took the back seats so we had to sit up front.” Another Catholic patient noted, “When we had a function going on, the whole community just comes together.”

Apparently this kind of inclusive attitude ran throughout the 20th century at Kalaupapa. Latter-day Saint convert Mary Sing recalled, “When I came [to Kalaupapa in 1917], everybody was living just like a family. Nobody says anything bad about the other religions. Everybody was together. They respected each church.” Sing added, “If the Catholics had a party . . . they [would] wait for the Mormon people to get through with their service. . . . And so [it] is with the Protestant; everybody was happy.” One Protestant patient, Edwin Lelepali, known affectionately as “Pali,” recalled, “Us and the Catholic Church and the Mormon Church, we’re always getting together.”