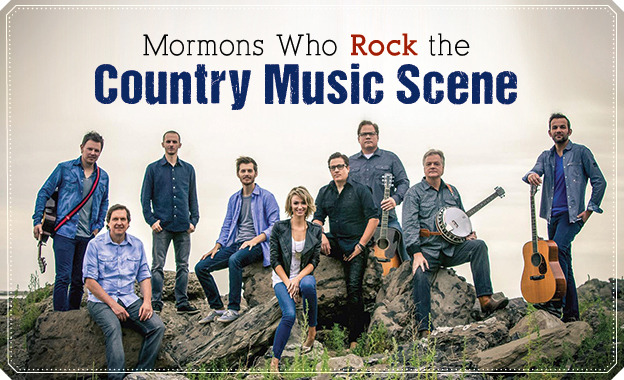 Nashville is brimming with talented Mormons. In this country music metropolis, a former bishop has written hit songs for stars like George Strait and Reba McEntire, and a Young Women president once shared the stage with Dolly Parton. Here, the close-knit LDS community uniquely intersects with a network of exceptional LDS musicians, including veteran songwriters, up-and-coming producers, and some of the hottest acts around.

Church member Tony Martin was a reporter at a Chicago newspaper when his songwriting career took off in the late ’80s. Country music star George Strait recorded a song written by Martin, and soon Martin packed up and moved to Nashville.

“My hobby was paying better than my job,” he recalls. “But when you show up in Nashville with your sack of songs, it’s like opening a store in town—nobody knows the business is open, and you don’t have a lot of product.”

Martin hasn’t had many problems selling his “sack of songs,” however. In fact, he is one of the most successful songwriters in Nashville. His tunes have been recorded by stars like Rascal Flats, Keith Urban, and Tim McGraw, and he has 15 number-one hits under his belt.

Jason Deere, another successful LDS songwriter and producer, has written songs for acts like Lady Antebellum and LeAnn Rimes. Despite being offered the opportunity to be a recording star himself, Deere chose to stay behind the scenes. As a result, he was instrumental in building the success of the group SHeDAISY—three young Mormon sisters, Kristyn, Kelsi, and Kassidy Osborn, who moved from Utah to Nashville to pursue their dreams of stardom.

SHeDAISY has had more than a dozen hit songs and has toured with artists like Alabama, Dolly Parton, and Brad Paisley. The sisters have also performed for three U.S. presidents.

The Mormon connections to country music don’t end there. You might have heard of the Grammy Award-winning group Diamond Rio, which has been a mainstay in country music since the ’80s. But did you know that their keyboardist, Dan Truman, is LDS?

Even songwriter Tyler Castleton, who is best known for his prolific work with LDS artists like Michael McLean, Kenneth Cope, Hilary Weeks, and Jenny Oaks Baker, has strong Nashville roots. In fact, he wrote the hit song “For the Love of a Woman,” recorded by Martina McBride.

“Nashville is such an amazing community,” adds Brandon Metcalf, who is making a splash as one
of the hottest new music producers in town. “The best songwriters and performers in the world are here.”

Thriving in the Bible Belt

For LDS music artists, being a member of the Church in the Bible Belt is incredibly rewarding, but it hasn’t been without its challenges.

Truman recalls a time when Diamond Rio was signed with a Christian record label. “They didn’t realize I was a Mormon until after they signed us,” he explains. “So they asked us not to talk about anything Mormon and not to mention that I was a Mormon. They thought I would be a blemish on the band. We parted ways with that music label after the first album.” He adds, “A few
people can be tough on Mormons, but the majority of the people don’t feel that way.”

“There have been some arms-length dealings between Christians and Mormons historically,” acknowledges Deere. “But Tony [Martin] and Dan [Truman] kind of plowed the road for me. I’ve been working in country music for 20 years now, and people know what I’m about even before I
walk in the room.”

“Once you just decide who you are and what you stand for, people identify you as that and accept you as that,” says Martin. “Nashville is a nice town with nice people. There are a lot of good Christian people here who go out of their way to make people feel comfortable. Southern
hospitality is part of the culture.”

“I think people are becoming more forward thinking all the time,” adds Metcalf. “I’m hoping some of those walls will come down more and more.”

Staying True to the Faith

Overcoming religious barriers in the Bible Belt can be challenging, but enjoying success
in the country music industry can be, too. From time on the road to steering clear of backstage parties, there are plenty of pitfalls to navigate through.

“Being away from family has been the biggest challenge,” says Tim Gates of DueWest. “We still try to maintain the important things: family prayer, family home evening, and just being a family unit. I’ve had to be creative, using the internet and FaceTime to stay connected and making sure I’m calling every night for family prayer.”

Gates says the members of Due West bring their temple clothes while on tour so they can attend the temple whenever they get a chance, and their common faith helps strengthen one another.

“I have two other guys with the same beliefs. We’re always keeping each other in check,” he says.

Though Truman is the only Mormon in Diamond Rio, he shares the same values with his bandmates, which has helped him stay worthy and live Church standards.

“I’ve been blessed to play with this band for 20 years,” he says. “Every one of the guys in Diamond Rio is a really good family guy. The biggest plus for me is that they all have lifestyles similar to mine.”

He continues, “It gets complicated out there because once you start having hit songs and you’re on the radio and on television, everyone treats you differently—all the rules go away. So, we literally have a rule in the band: no women on the tour bus unless they are your mother, your sister, your daughter, or your wife.”

But it’s not just the performers who face temptations—the LDS musicians behind the scenes have to make tough choices, too.

“Country music subject matter can be about some of those things we don’t believe in doing, and it can be glorified. Drinking songs, for example, can be catchy sing-along kinds of songs,” says Martin. “Even if that’s popular, I’m not going to write those songs.”

Mormons in Nashville are always doing their best to be a force for good and to share positive, uplifting messages through music.

“We always push to have at least one song on each album to let people know what we believe,” says Truman. “We want to be inspirational and uplifting.”

“What I love the most is when someone says, ‘That song changed my life,’” says Gates. “When Due West released the song ‘I Get That All the Time,’ I remember a concert with a family holding up a sign with the title. This dad had a kid on his shoulders, and they were singing at the top
of their lungs. We saw how that song had brought them together. I can’t even tell you the town, but I can remember those faces.”

“We’ve met some people who have joined the Church through our music,” says Kelsi (Osborn) Simpson of SHeDAISY. “That is the greatest reward for what we do. It’s a form of missionary work—it always has been for me.”

In addition to sharing positive messages, some LDS artists in Nashville are taking things a step further by sharing their testimonies of the gospel.

Brandon Metcalf, for example, founded a company called 11-17, which focuses on creating LDS music. “LDS music specifically has been a big part of my testimony,” he says. “I feel so blessed with what I do with my career. This is a way for me to use those talents and resources in a way that is faith-based and inspirational.”

Another way Mormon musicians in Nashville are sharing their testimonies is through the Nashville Tribute Band, a group founded by Jason Deere and Dan Truman.

In 2003, when Deere was jet-setting all over the world working on dozens of projects, he was asked to teach early morning seminary. “Everything inside of me wanted to say no, but the words that came out of my mouth were, ‘I’ll do it,’” he recalls.

“I was teaching the Old Testament, but I couldn’t get my mind off the Restoration,” he says. That’s when Deere felt inspired to write an album of songs about the early history of the Church.

He shared his ideas with his good friend Dan Truman, and this led to the creation of the Nashville Tribute Band—a revolving cast of LDS songwriters and recording artists. Their first album, Joseph: A Nashville Tribute to the Prophet, was a huge success, so the band followed up with tribute albums about the pioneers and missionary work as well. They most recently added a Christmas album to their repertoire.

Since its inception, the Nashville Tribute Band has performed more than 1,000 shows in the United States, Canada, Australia, and China, and they have plans to travel to Brazil next year.

“I would never go out on the road as much as I do if it weren’t for sharing the gospel,” says Deere. “But it’s really the best way I know how.”

The revolving cast of professional musicians is based on availability, but everyone does their best to participate.

“I go out of my way to play these gigs,” says Truman. “Everybody’s heart is in a great place, and it’s fulfilling on so many levels. My favorite show that I do is the Nashville Tribute show.”

“This is what we do to give back,” says Deere. “We all love to serve as members of the Church.”

The band’s album, Redeemer: A Nashville Tribute to Jesus Christ, is different than previous projects because it is aimed at a broader, Christian audience. The album serves as a platform for Mormons and other Christian artists to unite and testify of the divinity of the Savior. Each song presents a unique perspective on Christ through the eyes of those who interacted with Him, including John the Baptist, a blind man, the woman taken in adultery, the Apostle Peter, and the soldier and the thief at the Crucifixion.

“In addition to LDS guest artists like David Archuleta, SHeDAISY, and Alex Boyé, there are lots of guest artists on this record who aren’t LDS,” says Deere.

“For example, I called up John Cowan, who is revered as one of the greatest singers ever, and told him, ‘Hey, we’re working on a record about Christ, but it’s being done by a bunch of Mormons.’ He said, ‘I don’t care. I’ll do it.’”

Dan Truman’s bandmates from Diamond Rio are also guest artists on the album. “There is so much godlessness in the world,” says Truman. “Christians and Mormons need to come together.”

Because this album is not LDS specific, the Nashville Tribute Band hopes it will open doors for them to sing in churches of different denominations across the world.

“We can hand Redeemer to people and say, ‘This is what we believe in,’” says Gates. “The main purpose is for people to understand that we’re Christians and that Jesus Christ is the Savior of the world and the center of the Church.”

“Music is the most powerful and quickest way to touch someone’s heart for good,” says Simpson. “That’s why I’m so passionate about the Nashville Tribute Band. I’ve seen the good it does—it’s truly inspired.”

Deere adds, “To say that I love something more than Joseph is a really tall order, but this is my favorite album. It’s changed me more than anything I’ve ever done.”

Redeemer: A Nashville Tribute to Jesus Christ is now available at Deseret Book and deseretbook.com.