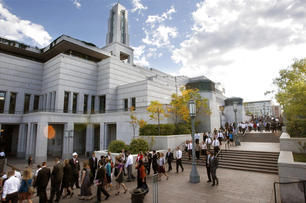 Mormons should prepare for scrutiny, opportunities

It seems likely that, over the next year or two, The Church of Jesus Christ of Latter-day Saints will be scrutinized, both in the United States and beyond, at least as intensely as it has ever been before.

Much of that scrutiny will be unfair. Some will be infuriating.

Skimming through newspapers and magazines over the past few days, I've seen the membership of the church described as "anti-Christs," "heretics," "cultists," "freaks," "fanatics" and (the cleverness and originality of this hardy Internet perennial never fail) "morons." So much for the peculiar subculture of online comments sections. But more articulate (elitist) scorn has also been on abundant display.