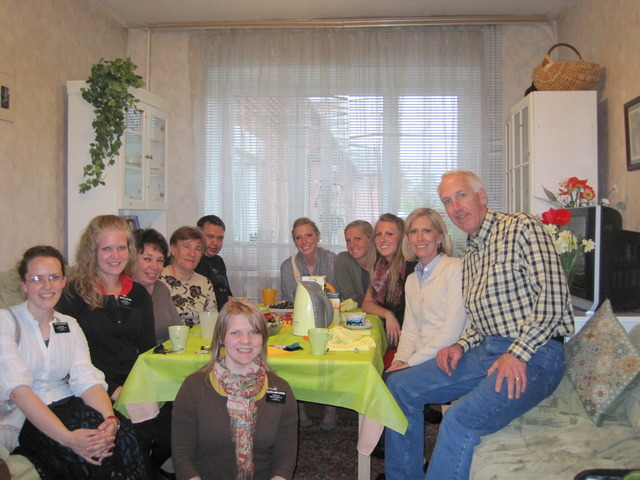 Members of the Church in Russia had reason to rejoice on Sunday as Elder Russell M. Nelson of the Quorum of the Twelve Apostles organized the first stake in Moscow.

More than 1,100 people attended the meeting in an auditorium in downtown Moscow as six of the branches in the area became wards and the remaining three remained branches in the formation of the new stake.  Yakov Mikhaylovich Boyko has been called as the stake president with Vladimir Nikolaievich Astashov and Viktor Mikhaylovich Kremenchuk as counselors. Vyacheslav Viktorovich Protopopov has been called as the stake patriarch.

“I couldn’t be more pleased with those chosen to lead,” Charles Cranney, a former Moscow mission president, said. “They are truly men who thrust in their ‘sickle with their might.’ They simply ‘do it.’”

Nearly a month ago, Stephen Sorenson, the current mission president of the Moscow Russia mission, called all the missionaries to a special meeting where he made the announcement. That Sunday, mission district leaders took a letter to each branch president to read after the administration of the sacrament.

Sorenson attended one of the branches that day. After the announcement was made, Sorenson watched the congregation’s reaction as the branch president gave the news.

“From my vantage point I could see for some of the longtime members, it took a second or two to register,” Sorenson said. “There was a soft, audible gasp from the congregation.”

“We were elated of course,” Sorenson said. “Everyone was overjoyed, grateful and humbled. It was very happy news. It’s just a wonderful blessing from the Lord.”
Although only recently announced, the groundwork for making this possible has been going on for many years.

Cranney, who served as mission president in Moscow from 2007 to 2010, said his last year in the mission was spent organizing the area to look like a stake. At a mission presidents’ seminar in August 2009, area presidency first counselor Elder Kevin W. Pearson told Cranney that Elder Perry of the Twelve, who was over the area at the time, requested papers for a stake in one year.

“At first I thought it wasn't possible, but the idea settled on me that night, and the next morning I was able to talk with Elder Pearson about how it might be accomplished,” Cranney said.

They spent the next year working with local leadership, changing boundaries, combining branches, joining the two districts together into one and other tasks to prepare the area to operate similarly to a stake. He said a “spontaneous outpouring of the Spirit” helped as less-active members returned to activity on their own and 18 members turned in their mission papers.

“It was truly a new day--a spiritual renaissance--and the stake structure was in place.”
Although the Church’s history goes back nearly 170 years, most of the growth has occurred in recent years. In 1843, Joseph Smith called Orson Hyde and George J. Adams to missions in Russia, but they never made it over after the martyrdom of the prophet. In 1903, Elder Francis M. Lyman, an apostle, offered two prayers of dedication in St. Petersburg and Moscow, but due to political circumstances during the Bolshevik Revolution, the Church was unable to be established. Elders Russell M. Nelson and Hans B. Ringger went to Moscow in 1987 and met with the chairman of the Council of Religious Affairs as well as leaders of other denominations. The first mission to encompass Russia was the Finland Helsinki East mission, created in 1990. In 1992, it became the Russia Moscow mission.

The members will benefit from having a stake in many ways. They will now have their own priesthood leaders holding all of the keys bishops and stake presidents have. High priests will be ordained which will be another blessing to the people. A stake patriarch will be called. Sorenson explained that there is a backlog for members to receive their patriarchal blessings, as they have to wait for traveling patriarchs to visit their area.

Kelsey Jones, who served as a missionary in Moscow when the announcement was made, said all the missionaries gasped initially when they heard.

“What we had heard was the stake would be organized next spring, so when he said that we were in shock,” Jones said. “We didn’t expect it at all and then everyone started crying because it was such a blessing.”

Elder and Sister Packard, a senior couple serving in Moscow, were at the special meeting when the mission president made the announcement.

“We were ecstatic!” Packard said.

Later on in the morning, Packard said their branch president read the letter in church, which lasted between 10 to 15 seconds.

“There was a calm over the congregation for a split second or two and then the tears began to flow from many in the congregation,” Packard said, “some who have waited 20-plus years to hear those words.”