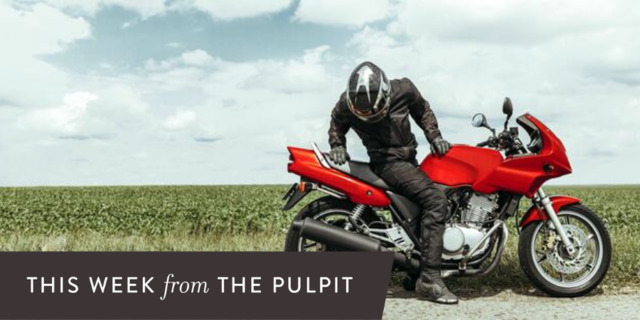 Editor’s note: “This week from the pulpit” highlights recent messages from General Authorities, General Officers, and leaders of the Church. This story may be updated throughout the week.

As a teenage boy, Bishop L. Todd Budge, Second Counselor in the Presiding Bishopric, borrowed his uncle’s 90cc Suzuki motorcycle for a warm summer ride. But on the ride, the motorcycle ran out of gas, leaving him to push the heavy bike all the way home. Exhausted as he returned home, he was surprised when his uncle came outside, sat on the motorcycle, flipped a switch, and the motor’s engine immediately started. His uncle explained the motorcycles have a reserve tank in case you run out of gas. “All you have to do is flip the switch,” his uncle said.

“How many of us struggle through life carrying heavy burdens in the heat of the day, relying on our own strength?” Bishop Budge asked, before testifying of a source of power similar to that of a reserve tank of gas—“the infinite power made possible by the atoning sacrifice of Jesus Christ.”

Bishop Budge proceeded to discuss a book he read called “A Broke Heart,” which was written by a Christian horse trainer who explained that “a wild horse that has been tamed is not broken by the process but discovers the joy and freedom of becoming one with its master—being broke, not broken,” Church News reports.

“Likewise, God’s intent is not to break us but to redeem us. He does not want us to be brokenhearted, but to have broke hearts and contrite spirits so that He can take the reins of our lives and guide us with His love to receive all of His promised blessings,” Bishop Budge said.

Elder Neil L. Andersen also writes of the Savior’s Atonement and His gift of forgiveness in the February issue of the Liahona.

“We must remember . . . that the divine gift of forgiveness can never be earned; it can only be received. Yes, commandments must be obeyed and ordinances observed to receive forgiveness, but personal effort, no matter how great, pales in comparison to the cost of redemption. In fact, there is no comparison,” Elder Andersen said. “Forgiveness is a gift, and the only One who can give the gift is the Redeemer and Savior of the world, Jesus Christ.”

He closes his article by promising that as we embrace the words of our Heavenly Father regarding repentance and mercy found in the scriptures, “the Savior will shape forever the divine destiny awaiting you.”

► You may also like: 2 tricks Satan uses to prevent us from repenting

Also found in the February Church magazines, Brother Mark L. Pace, Sunday School General President, wrote of how he learned, as a young man praying to gain a testimony of the Book of Mormon, that the promptings of the Holy Ghost are often felt rather than heard or miraculously manifested.

“Promptings from the Holy Ghost are often quiet and subtle. God will rarely shout to try and get our attention. Instead, as we take time to pause, feel, and ponder, we show Him that we are listening and desire answers through the Holy Ghost,” Brother Pace said. “The next time you kneel in prayer, instead of jumping up after saying ‘amen,’ wait for a few moments. Stay on your knees and just listen.”

Read Brother Pace’s article in the new For the Strength of Youth magazine here.

I commissioned this painting for Pat as an anniversary present one year. This was her great-grandfather’s ranch house in...