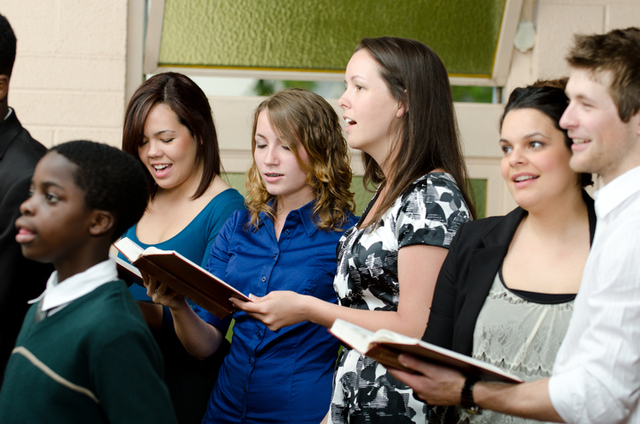 What You Didn't Know About Worshipping Through Music

As Latter-day Saints, we worship as individuals, as families, and as a community, but although we understand many aspects of how we worship, we do not always consciously think about what worship is or what it is supposed to do for us.

Worship may best be understood as an actual encounter with God, whose most important purpose is to change us. This transformation can happen, however, only when we worship in and through the name of Jesus Christ, worshipping as he has taught us and allowing His grace to sanctify and empower us. Truly worshipping requires that we deepen our devotion, worshipping with our heart, mind, and strength and striving to make the experience even more powerful by making the effort to prepare before, focus during, and be more aware after we worship.

One way to improve your worship in your life is through music.

Music as a Form of Worship

Music is found in every culture and is a basic feature of human life. It has a profound ability both to express and to impress. Through it we can express a full range of our feelings and desires, often better than we can through words alone. It also has a powerful ability to influence how we feel, think, and act. As a result, it can be a particularly potent means of worship.

But for music to be more than a way of expressing ourselves or being influenced, for it to truly be a means of worship, we cannot simply sing, play, or listen to it. We must deliberately intend it to be worship, which requires that we perform it or enjoy it with the awareness that it is meant to praise God and draw us closer to him. Verena Ursenbach Hatch (1922–2012), a Latter-day Saint musician and author, observed that when properly experienced, music can be worship: “First as an act of worship, it provides the vehicle or medium by which man actually communes with God through song. Second, as an aid to worship, it prepares an emotional climate in which worship can take place.”

Although music probably began with Adam and Eve and their family, the earliest biblical reference to music or musical instruments is Genesis 4:21, where, as part of the general rise of human civilization, Jubal invented stringed instruments, probably the lyre, and the pipe (KJV, “harp and organ”). The first recorded reference to singing, particularly singing a song of praise, occurs after the crossing of the Red Sea when Moses and then Miriam and the women of Israel sing praises to the Lord for his victory over Pharaoh’s army and their deliverance from bondage (Exodus 15:1–21). Although we do not know anything about the melodies or type of music used by the children of Israel, the text that has been preserved is poetic, employing parallelism like the later psalms and manifesting an ability to stir emotion.

With David, we first have significant information about how music was used in the worship of the Lord in Old Testament times. Described as a skilled lyre player and singer, David soothed the troubled king Saul and drove away evil spirits with the power of his music (1 Samuel 16:14–23; 18:10). Similarly, President Boyd K. Packer taught about the power of good music over evil thoughts and influences in our lives.

Music in the New Testament

The first musical expressions in the New Testament appear in the nativity stories of Luke. Known in church tradition and scholarship as canticles (“songs”), in their final form these are poetic renditions in Greek that movingly express the sentiments of such characters as Mary when she visited Elisabeth (the Magnificat, Luke 1:46–55), Zacharias at the blessing of John the Baptist (the Benedictus, Luke 1:68–79), the angels outside of Bethlehem (the Gloria in excelsis, Luke 2:14), and Simeon in the temple (the Nunc dimittis, Luke 2:29–32).

Perhaps more significant than passages about sacred music are fragments of early Christian hymns that appear in the writings attributed to Paul. If these are early Hebrew or Aramaic songs that Paul has translated for his readers’ use, they may represent some of the earliest Christian hymns. Because they almost all have to do with Jesus Christ and His role as Creator and Redeemer, they are usually called Christological hymns.

Music in the Restoration

The Reformation brought about renewed interest in Christian religious music. Martin Luther loved music, and one of his greatest contributions was the reintroduction of congregational singing [which had gradually disappeared over the years]. No longer the preserve of monastic or professional choirs, singing became a central part of worship for the entire congregation. Luther was the composer of at least 37 hymns, including “A Mighty Fortress Is Our God,” which appears in our own hymnbook. “Characterized by ‘a plain melody, a strong harmony and a stately rhythm,’” his hymns have the potential to stir powerful feelings about God and create a desire to worship and serve him.

This renewed interest continued up to the time of the Restoration. Emma Hale, who married Joseph Smith in 1827, came from a Methodist family in Harmony, Pennsylvania, so she would have been familiar with Methodist patterns of hymn singing. In July 1830 Emma received a revelation through Joseph that called upon her “to make a selection of sacred hymns, as it shall be given thee, which is pleasing unto me, to be had in my church. For my soul delighteth in the song of the heart; yea, the song of the righteous is a prayer unto me, and it shall be answered with a blessing upon their heads” (D&C 25:11–12).

This direction was preceded by a mandate for her to expound the scriptures and devote herself to writing and learning, all of which were useful to her in selecting hymns that would help the Saints praise God and learn His truths. Michael Hicks, a music professor at Brigham Young University, has noted that because the selection had to come from the repertoire of other churches, the revelation acknowledged the inherent merit of those musical traditions. Furthermore, “it equated sacred singing with praying, making vocal music, in effect, requisite to worship.”

Emma’s collection became the basis for the Church’s first hymnbook, which was published in 1836. Entitled A Collection of Sacred Hymns for the Church of the Latter Day Saints, this 127-page hymnal contained only the hymn texts, which worshippers would then sing to familiar tunes. About 50 of the hymns had Protestant origins; another 40 were by Latter-day Saints, particularly W. W. Phelps.

The most recent official collection, Hymns of The Church of Jesus Christ of Latter-day Saints, was published in 1985. This collection of sacred songs begins with inspired direction from the First Presidency in its preface that explains how these hymns should be used in our church meetings, homes, and personal lives:

“Inspirational music is an essential part of our church meetings. The hymns invite the Spirit of the Lord, create a feeling of reverence, unify us as members, and provide a way for us to offer praises to the Lord.

“Some of the greatest sermons are preached by the singing of hymns. Hymns move us to repentance and good works, build testimony and faith, comfort the weary, console the mourning, and inspire us to endure to the end.”

This instruction presents sacred music as having the essential features of worship. First, it invites the Spirit of the Lord, which produces worship of the heart, exhibited by reverence. It also cultivates the worship of the mind as we praise the Lord and learn about him through “sermons preached by the singing of the hymns.” Further, inspirational music results in worshipping the Lord with our strength as it changes us and enables us to do his will through repentance, good works, charity, and enduring to the end.

Power Through Worshipping with Music

Music shapes our communal worship, but we must be mindful and make deliberate effort for it to influence us spiritually. Prelude and postlude music frame our worship services, helping us prepare to worship by effectively demarcating sacred time. The prelude invites the Spirit and helps us prepare for the prayers, preaching, and ordinances that follow, but a lovely musical introduction and the postlude that follows the meeting are nothing but background noise if we chat, rush in late, surf on our cell phones, or let other matters preoccupy us while they are being played.

The opening and closing hymns are closely connected to the invocation and benediction that they precede, but they become prayers themselves if we realize that we are actually singing to God. Sacrament hymns are particularly sacred, providing us an opportunity to testify how Jesus suffered and died for us before we participate in the ordinance of the Lord’s Supper. Regardless of musical ability, each of us is encouraged by the First Presidency to worship by singing the hymns, and if we do so by concentrating and setting aside outside influences and concerns, we can encounter the Lord in a powerful way.

Hymn singing is not the only music that requires our participation to be effective as worship; listening to the ward choir sing or the performance of a special musical number performed requires mindful, spiritual attention as well. Ward, branch, and stake choirs play an important part in our communal worship by inviting the Spirit through hymns, hymn arrangements, or other appropriate religious music. An earnest choir that seeks the Spirit can have much the same effect in a ward meeting that the Mormon Tabernacle Choir has in general conferences of the Church.

Like many other members of the Church, I have personally experienced the same power of music in my personal life that the First Presidency described in the hymnbook’s preface:

“In addition to blessing us as Church and family members, the hymns can greatly benefit us as individuals. Hymns can lift our spirits, give us courage, and move us to righteous action. They can fill our souls with heavenly thoughts and bring us a spirit of peace.”

What the First Presidency has taught about the power of hymns applies to all good music, which allows it to be a fundamental part of our worship. Because I have found it a natural way to express my feelings for God, I love the psalmist’s expression,

Just as a sacrament hymn prepares us for renewing our covenants, listening to beautiful music or gently singing a hymn can help us prepare to pray. Sometimes I find that a choice hymn or beloved song can convey my thoughts and deepest feelings to the Lord better than can prayer alone. The texts of sacred music are filled with the same peace, truth, and power that I find in the scriptures. But above all, such music can make any place and time sacred, transporting me higher. As with other forms of worship, musical spiritual experiences always leave me changed, inspired, strengthened, and more eager to do the Lord’s will.

For more inspiring insights from Eric Huntsman, check out Worship: Adding Depth to Your Devotion, available at Deseret Book stores or on deseretbook.com.