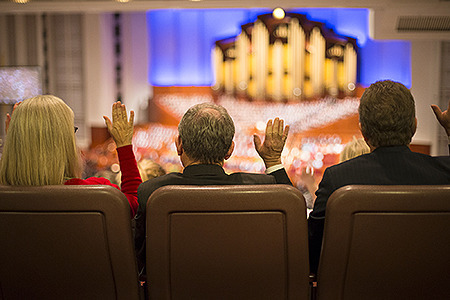 My Experience in the Conference Center During the Opposing Vote

Thanks to my job, I am pretty plugged into LDS happenings. I was well aware of the strong possibility that a group of people were attending the afternoon session of conference with the express purpose to give an opposing vote. I watched with trepidation as President Uchtdorf began to read the names of the First Presidency, not sure if or how things would play out.

The first round of "opposeds" were not made up of a large number of people--to me it sounded like around 10 (although I acknowledge I could be off on that count)--but the sounds of the few resonated loudly in my ears. I heard mostly male voices, but at least one of them was a woman.

I was sitting next to my 12-year-old niece who immediately looked up at me in confusion. The opposed votes happened several times, although after the first couple times the number of voices reduced.

Let me clarify something: while I don't agree with the method used here, I don't have any personal issue with those who felt the need to dissent. I know there are members in our faith with a wide variance of experience and belief. We don't all have to think the same way to be brothers and sisters. I genuinely hope those who felt the need to oppose can find some peace within our community.

But for an act I was anticipating, I was surprised by how shocked I was when it actually happened. I am aware there is a history of dissenting votes in conference, but this is the first time it's happened in my memory. In some ways it feels a little different from past incidents because the group who coordinated this effort professes no common agenda outside of a general dissatisfaction with the direction of the Church. Agitation seems to be the goal, and I don't expect it will end with this conference.

However, the dissenting votes had an unexpected result for me. For years I have grown used to the routine of the sustaining vote. I raise my hand in faith--but perhaps without the level of thought such an act is owed. Today I found myself raising my hand just a little higher. More than ever before, I wanted my sustaining vote counted.

The honor and opportunity to sustain our leaders is one I don't want to take for granted again. Today's vote allowed me to think deeper about my commitment and faith. I wasn't expecting it, but today's opposing voters strengthened my sustaining vote. And I don't think I'm alone. I can't remember a time when the congregation sang the intermediate hymn with more gusto. Tears came to my eyes when loudly and with resolve 20,000 in the Conference Center were joined by members around the world in singing the words, "We thank thee, oh God, for a prophet!"