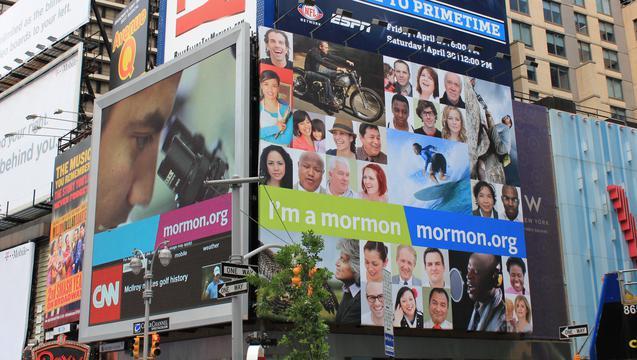 Mormons are the talk of the town these days, and the Church is aiming to create more buzz with their newly-launched “I’m a Mormon” campaign in New York City.

The ads feature faces of members of the Church from all walks of life with the aim of directing people to the mormon.org website where they can view over 30,000 member profiles. They can also chat with live representatives and gain access to many videos with an inside look into their lives.

“We’ve added New York to the cities we’re going into this year because of the conversations that are happening there,” said Dale Jones, a spokesman for the Church. “On a broader scale, there’s a national conversation going on about Mormonism and we want to be a part of it.

Earlier this month, mormon.org was selected as one of Interactive Media Awards’ “Top Ten Websites of The Year,” a contest with more than 4,000 entries. Originally launched in 2000, the website was revamped last year with the focus on individual members and how their faith impacts their lives.

“The idea is to give a glimpse into the ordinary and extraordinary aspects of our members’ lives,” Jones said. “This effort helps people understand who we are because of what we believe.”

Dani Hunt, a member of the Church from Manhattan, N.Y., said a lot of people think of members of the Church as similar to the Amish, but seeing all of the photos helps them to see the difference.

“I’m grateful for it because it makes us more relatable,” Hunt said. “It makes us seem more approachable.”

She said it was recently announced in her ward that because of these ads, the missionaries in her area have been getting calls from local hotels like the Ritz Carlton and the Marriott because people keep taking copies of the Book of Mormon as souvenirs and they need replacement copies.

Hunt said the campaign allows more conversations to be started, and she’s had more people at work ask her questions about the Church.  Many of her non-member friends have told her they’ve seen the ads on the subway and on cabs.

In fact, just yesterday, her Jewish realtor mentioned seeing the ads and asked Hunt if she could learn more about the LDS Church. Hunt was excited about the missionary opportunity created by the campaign, and plans to meet with her realtor and the missionaries soon.

To learn more about the ad campaign, click here.