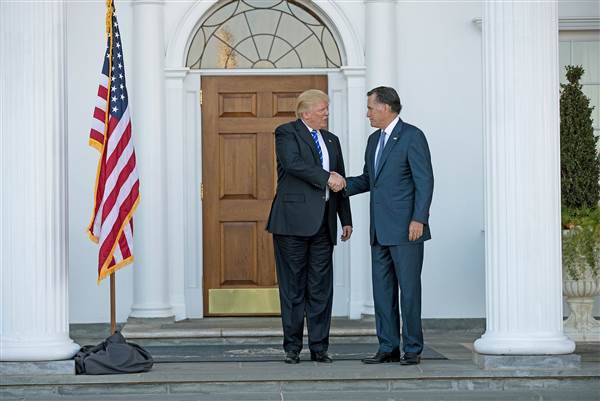 After his meeting with Donald Trump over the weekend,  Mitt Romney said the two had a "far-reaching" conversation and a "very thorough and in-depth discussion in the time we had and appreciate the chance to speak with the president-elect and look forward to the coming administration."

Mitt Romney emerged smiling Saturday from a closed-door meeting with President-elect Donald Trump — a face-to-face sit down he called "thorough and in-depth" after they traded bitter barbs with one another during a divisive election.

Taking a softer tone, Trump and Romney seemed to bury the hatchet at the Trump National Golf Club in Bedminster, New Jersey — where the businessman-turned-politician moved his White House transition team for the weekend — in a meeting that lasted about an hour and a half.

Trump is considering Romney for secretary of state, a source close to Trump told NBC News, although the president-elect has not publicly said what role, if any, Romney could play.

"It went great," Trump told the press after walking the former governor of Massachusetts outside.