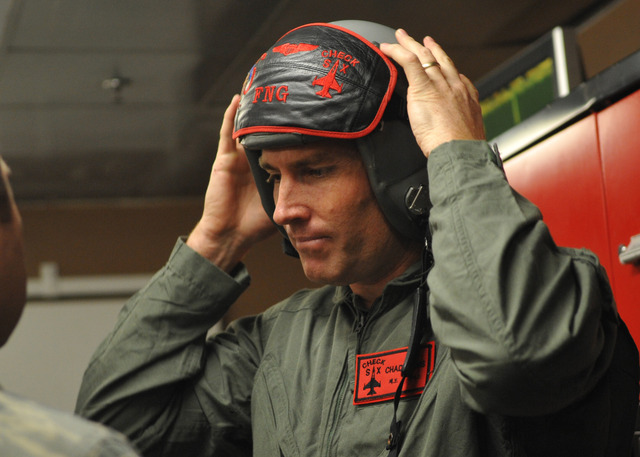 Chad Lewis is a big guy. And his impact on those around him has been even bigger.

The former BYU Cougar went on to become a star NFL football player for both the Philadelphia Eagles and the St. Louis Rams, helping to catch winning touchdown passes and even win the Super Bowl one year. Now, as the NFL ambassador to China and the Far East, his reach has become international.

This weekend he visited the Osan Air Force Base in South Korea as a part of celebrating Veterans Day, which is on Nov. 11.

“It’s an opportunity for me as a representative of America, of home, of their families, of the NFL, to say thank you and let them know how grateful we are for their service, for our freedoms because of what they’re doing,” Lewis said. “You can’t imagine the response the troops show when someone comes from America and tells them thank you. They are so grateful and so appreciative because they’re putting their lives on the line, and to know that someone cares, their response is amazing. I am humbled every time I get to be around them. It is so cool I can’t even explain it.”

Maj. Matt Russell, Lewis’ friend from high school and the one who orchestrated the visit, affirms that view. “These kinds of visits always boost morale, especially at an overseas base where many of the airmen are here without their wives and children for a year or more,” he said. “It just reminds the airmen that someone appreciates their sacrifice. When that someone is a national hero, it's like the whole country is saying thank you.”

During his visit, Lewis gave two firesides, one, a Sunday evening devotional at the chapel, and a second on Monday night for the military personnel. “At both meetings it was evident that people were inspired, deeply touched and awestruck with the largeness of Chad's soul,” Russell said.

Branch President Travis Adams said the Sunday devotional did amazing things for the LDS community, and the wing chaplain, Lt. Colonel Warner, was so moved that he produced an impromptu gift for Lewis from the base chapel. “I don't think he realizes how deeply touched I was,” one airman said. “I don't know why, but I was just weeping.”

At the Monday meeting, wing commander and former Air Force Academy football star Col. Patrick Malackowski wished all 5,000 base personnel had been there to see Chad's presentation because it was so inspiring, while his wife explained that she "really needed that tonight. He was really speaking to me."

Lewis was able to tour all over the base, visiting individually and in groups with the airmen, handing out NFL hats and shirts, and most importantly, thanking them for their service.

“Every base that I’ve been to, there are people that you can tell are just so grateful,” Lewis said. “And for each base that I leave, I go away with a general or a captain or a sergeant’s face burned in my mind—that’s how grateful they are to spend some time with you and know that you care.”

He also got to fly with Russell in an F-16, being cleared for the flight with only millimeters to spare as he measured in exactly at the limit to be able to fit in the cockpit. From Russell’s enthusiastic description, it was the ride of a lifetime, complete with acrobatics.

As Lewis left on a calmer, commercial flight to return to the United States, Russell reflected on the visit. “He left our branch and our base uplifted,” he said. “He is a good friend and has always impressed me, but this weekend I was even more proud to call him my friend, if that was possible. Chad is an amazing man and I am grateful to know him.”

Lewis is emphatic about one thing, though: it all started with his mission. He became fluent in Mandarin Chinese while serving his mission in Taiwan, and when he started school at BYU after his mission, he continued studying it for the next four years. Now, he is the only person in the entire NFL—and almost in all of pro sports—that speaks Chinese, and this has opened up many more opportunities.

As the NFL tries to expand its market internationally, Lewis has been thick in the middle of it. “I meet with government officials and business sponsors for the NFL, I put on clinics for students in universities throughout China and I do a lot of interviews, mostly in Chinese. And those interviews play on their main television, they play on their bus stations and train stations, and that’s been a lot of fun—to describe and explain football to the Chinese people.”

But more than just learning a language, Lewis explained that his experiences prepared him for everything else that would come in his future.

“There couldn’t be any better training for life than serving a mission,” Lewis said. “There’s no way I could have played football in the NFL if I had not served a mission. The things I learned as a missionary made it possible for me to play football. . . . I can’t imagine being in the NFL without being a member of the Church, without the gospel in my life.”

Besides being a physical giant, it starts to become apparent that Lewis is a spiritual giant as well as he talks about putting on the “spiritual blinders” he acquired on his mission when bad stories were being told and “pray[ing] like crazy that those stories will roll off your back.”

As a pro football player, Lewis faced extreme challenges every day. “There are a lot of vices that are in and around the NFL, which is obvious if you just watch the news at night and see how many people are getting in trouble in professional sports. It’s a very, very high-pressure life. The pressure to perform is ginormous. So all the things you learn as a missionary—the spiritual strength, the discipline required to live the life of a missionary, including the rigorous schedule—were all applied every day in the NFL.”

Because of the work included in being a missionary—specifically, waking up early each morning, getting rejected all day long, not listening to music or going on dates, following rules with complete obedience—Lewis said that “it was the greatest training I ever could have had for the challenges that were waiting for me in the NFL. The NFL was almost easy after serving a mission.”