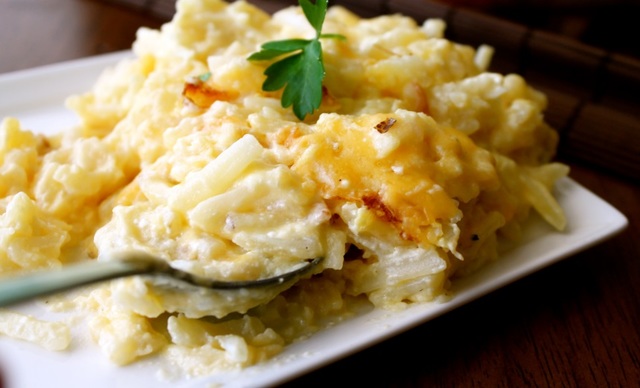 The funeral potatoes craze on Twitter is not over yet. Several weeks ago Walmart's targeted Facebook ads about the morbidly delicious food began intriguing and scaring people across the nation. And many turned to social media to ask about this bizarrely named food rooted in Mormon culture.

While everyone else was mortified and confused about funeral potatoes, Ash Sanders notes on NPR:

"Mormons were not confused. They were limbering up in the social media wings, ready to explain their most delectable food invention to the world. You see, Mormons like me grew up eating funeral potatoes—not just at funerals, but at potlucks, Thanksgiving, and Sunday dinner. They are a combination of cubed potatoes, cream of chicken soup, cheese, and—the coup de grâce—a topping of butter-crisp Corn Flakes. This comfort food has pride of place next to other Mormon classics like cream cheese Jell-O, all manner of ice cream, and "dirty soda"—a virgin drink spiked with flavored syrup.

"Funeral potatoes were memorialized as a collector pin during the 2002 Winter Olympics, held in Salt Lake."

But more than simply comment on social media trends, NPR dived into the history of this cultural tradition, explaining that Mormons' love of funeral potatoes could have roots in the 1950s:

"Mormons wanted to become models of the mid-century mainstream. Their cuisine went from wholesome farm food to the processed, Crocker-esque diet many middle-class Americans were turning to at that time. Once a people who made everything from scratch, they became a people who put ready-made foods into other ready-made foods: canned soup on instant rice, Sprite in sherbet, and, of course, Corn Flakes on potatoes.

"According to Jacqueline Thursby, a retired folklore professor at the Church-owned Brigham Young University, this new approach paired perfectly with the demands of the new Mormon housewife life, where big families and bigger congregations required food that could be made quickly, stored easily, and taste good to everyone. . . . Funeral potatoes became a staple—an essential fast food for hard times."

With this new look into a staple of Mormon culture, many took to Twitter to share their own hilarious insights:

SHREDDED. NOT CUBED. WHAT IS WRONG WITH YOU?

I’m a huge fan of a good potato dish, but I haven’t seen the corn-chip-crumble abomination (sorry, fans) since I left Utah a long time ago. You can do better than canned soup, people! 😬 pic.twitter.com/I1AFBcUb2F — The Relevant Questions (@RelevantQuest) May 31, 2018

Proof that Mormons have done one thing right during our 170 year history.