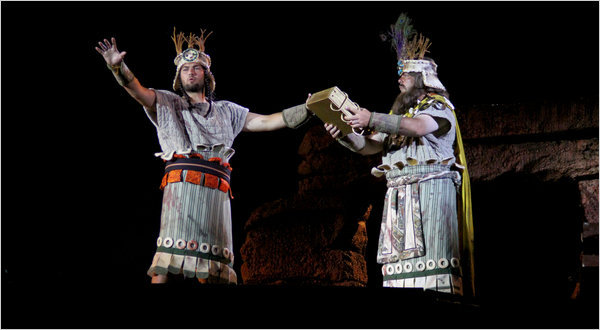 With its cast of 700, 1,300 costumes, 10-level stage and thrill-a-minute special effects of earthquakes, floods, fireballs, airborne deities and burnings at the stake, the annual Hill Cumorah Pageant, one could argue, has more in common with the spectacle of “Spider-Man” than with the merry snark of “The Book of Mormon.”

But then the pageant — staged here since 1937, on the very hill where, it is said, an angel named Moroni directed Joseph Smith to uncover golden plates 188 years ago — really is the Book of Mormon, a Cecil B. DeMille-style presentation of the holy book rather than the cheerfully profane Broadway version.
Read the rest of this story at nytimes.com