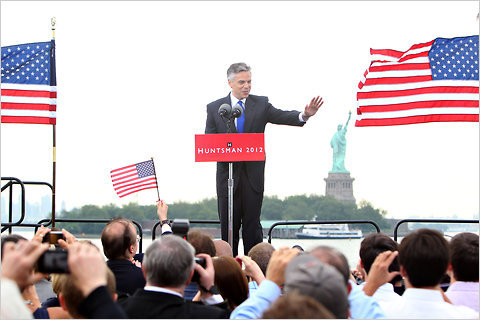 Jon M. Huntsman Jr., the former governor of Utah, officially announced he was running for president on Tuesday, telling an audience of supporters and reporters gathered at a park facing the Statue of Liberty that he would be a better leader than President Obama, for whom he served as the  ambassador to China until recently.

“He and I have a difference of opinion on how to help a country we both love,” Mr. Huntsman said of Mr. Obama. “But the question each of us wants the voters to answer is who will be the better president, not who’s the better American.”

Under cloud cover that turned the Hudson River behind him a steely gray, Mr. Huntsman vowed to provide “leadership that knows we need more than hope,” and “leadership that doesn’t promise Washington has all the solutions to our problems.”
Read the rest of this story at nytimes.com