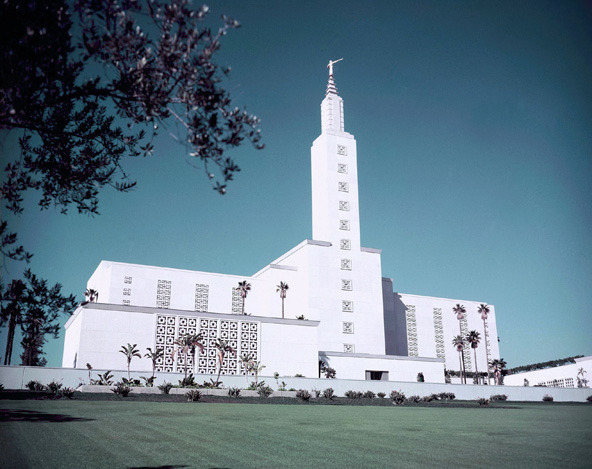 Visible from so many angles, it’s L.A.’s own version of the Chrysler Building, with a couple of caveats: no pedestrian access and only its members allowed inside. The Los Angeles Mormon Temple, like a secret fortress on a hill behind a large expanse of perfectly manicured lawn. The Modernist, slightly Deco, somewhat gothic structure has no easily definable style of architecture, unless you were to coin one: Mormonesque.

It’s been there almost all my life (the temple officially opened in 1956), a forbidden structure, the architecture of which was so impressive, the grounds so well kept, that one couldn’t help but want to walk on them. The temple itself is 190,614 square feet; the grounds 13 acres; and, at the top of the building, its gold statue of the angel Moroni (it’s hard not to comment on the name) 16 and a half feet, proudly blowing its horn, a beacon and a sentry for all to see. Just not up close.