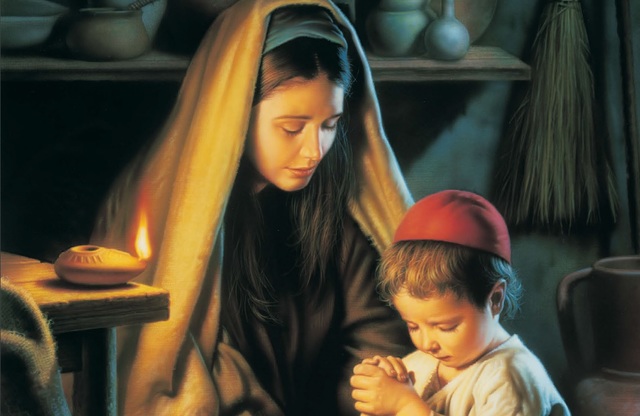 Mary, the mother of Jesus: Little is known about this remarkable woman who was called to carry and raise the Son of God. All we have in our scriptures are four lines spoken by this strong woman; four lines that show her humility, her faith, and her love of the Lord.

Yet, every year we tell the story of this remarkable woman who has come to symbolize and mean so much in the lives of millions around the world. In fact, for their December cover story, The National Geographic even highlighted the life of Mary, calling her the world's most powerful woman.

"Muslims as well as Christians consider her to be holy above all women, and her name 'Maryam' appears more often in the Koran than 'Mary' does in the Bible," Maureen Orth writes. "In the New Testament Mary speaks only four times, beginning with the Annunciation, when, according to Luke’s Gospel, the angel Gabriel appears to her and says she will bear 'the Son of the Most High.' Mary answers, 'Here am I, the servant of the Lord.' Her only extended speech, also in Luke, is the lyrical Magnificat, uttered in early pregnancy: 'My soul magnifies the Lord, and my spirit rejoices in God my Savior, for he has looked with favor on the lowliness of his servant. Surely, from now on all generations will call me blessed.' Indeed they have."

However, Orth is clear to state that the clues we have of Mary's life are elusive, detailing the little we do know about her:

"The Bible says she lived in Nazareth when Romans had control over the Jewish territory. After Mary became pregnant, her betrothed, Joseph, a carpenter, considered quietly leaving her until an angel came to him in a dream and told him not to. The birth of Jesus is mentioned in just two Gospels, Luke and Matthew. Mark and John refer to Jesus’ mother several times."

Yet, even with this little information, "no other woman has been as exalted as Mary," Orth writes. "As a universal symbol of maternal love, as well as of suffering and sacrifice, Mary is often the touchstone of our longing for meaning . . ."

While much of the world might see Mary as more than a mortal, praying to her for miracles and healing, we in The Church of Jesus Christ of Latter-day Saints understand Mary as a humble, mortal woman. But that does not make her sacrifice or her significance any less extraordinary. In fact, that a woman could be given charge of the Savior of the world sends a beautiful message to all of us of how much our Heavenly Father trusts us and believes in our inherent potential. Through Mary, we see how ordinary human beings can shape the course of the world.

That unique position of Mary has allowed her to stand as a symbol of the power and compassion of motherhood and all it encompasses. As Elder Holland said in this last general conference, "As Jesus said to John while in the very act of Atonement, so He says to us all, 'Behold thy mother!' Today I declare from this pulpit what has been said here before: that no love in mortality comes closer to approximating the pure love of Jesus Christ than the selfless love a devoted mother has for her child."

During this season, may we all remember the love and humility of Mary and strive to build it in our own hearts.

Lead image "Jesus Praying with His Mother" from LDS.org.