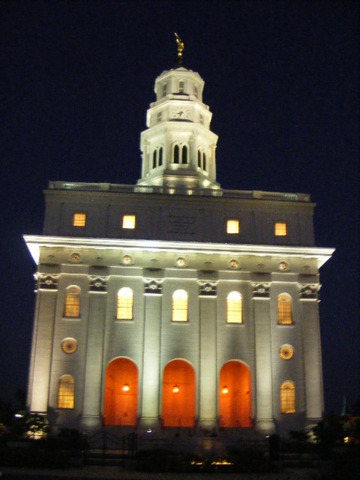 “When President Hinckley first announced the plans to rebuild the Nauvoo Temple, the excited response from Church members surprised him,” said Nauvoo Temple President Wayne Peterson. “So much of what we study about church history is central here in Nauvoo.”

The rebuilt Nauvoo Temple is a tribute to the early Saints who constructed the first temple on the bluff overlooking the Mississippi River. “Patrons who come to this temple feel something,” Temple Matron Joan Peterson said.

“The ordinances are the same in every temple, but they were first administered here,” said President Peterson. “The Nauvoo Temple was close to the Prophet Joseph Smith, and he surely must rejoice that it was rebuilt.” During the temple dedication, President Hinckley spoke of a vast unseen audience rejoicing in this temple. “There is a special spirit in this temple,” President Peterson said, “just as the Nauvoo Pageant says, ‘When you’re here, we’re here.’”

A Light in the Darkness

On August 20, 2010, heavy rain and 70 mph winds pelted Nauvoo, and lights went out all over town. Inside the temple, a generator provided emergency power for ordinance work to continue.  Young adults and adults performed baptisms in a lighted baptistry. Forty “soaking wet” patrons arrived for the 6:00 p.m. endowment session, including couples from Czechoslovakia, Switzerland, and Colonial Juarez, Mexico.  Thanks to the temple’s generator, “no one would have known the lights were out,” President Peterson said.

President and Sister Ludwig of the Nauvoo Illinois Mission were returning home from the St. Louis airport when the storm broke. They drove through two neighboring towns and along the river road, and everything was dark. When they reached Nauvoo and drove up the hill, they were greeted by lights inside the temple. The Nauvoo Temple was a light in the darkness.

After residing three years in Nauvoo, Sister Peterson said, “Ice storms, bugs, heavy rain can’t even compare to what the early saints experienced. They had to leave a beautiful temple and city behind, but they knew they could do it because they made covenants in the temple. They didn’t complain.”

“The Nauvoo Temple is a destination temple,” said President Peterson. Due to its isolated location, this temple is busy during the summer but not so much the rest of the year.  As a result, the temple is open six days a week, Monday through Saturday, between April and November. During the winter, it is open Tuesday through Saturday.

Patrons from all over the world come to the Nauvoo Temple. Tremendous numbers arrive from Europe, Australia, and New Zealand.  “Last summer 25 came from Japan,” Sister Peterson said.  “We would be overwhelmed if we knew where all of our patrons come from,” President Peterson added.

“Lots of young couples attend,” Sister Peterson said.  “Some drive five to seven hours to attend a session. Some celebrate their wedding anniversary here.” In addition, “the baptistry is filled all summer long.” Many young people travel by bus from many states to perform baptisms. “Their leaders prepare them well, and it’s a testimony-building trip for them.”

A Feeling of Coming Home

Hardwood floors, carpets loomed on 19th-century looms in England, artifacts from the Nauvoo era, and paintings “give me a feeling of coming home,” Sister Peterson said.  Every sofa, chair, carpet, rug, runner, drapery, or light fixture in the Nauvoo Temple either comes from or is a replica of the Nauvoo period.  “All temples have the Spirit, but the Nauvoo Temple is unique,” said Sister Peterson. “It is a tribute to Joseph Smith and the early Saints.”

Sixty-two couples from 30 temples serving as six- or 18-month temple missionaries and 141 district ordinance workers from five stakes feel at home in the Nauvoo Temple. Most of the district workers come from the Nauvoo Illinois Stake, with 79 Nauvoo First Ward members currently helping in the temple or on temple grounds.

Ken and Dianne Chipman from Orem, Utah, are completing an 18-month temple mission in Nauvoo. “President and Sister Peterson set the tone in the temple, and they are full of love for everyone. As we drive up the road to the temple, we still say, ‘Can you really believe we’re here?’ When we open the temple doors, we feel like we’re home. This is the closest to heaven we’ve ever felt,” Sister Chipman said.

Tomasi and Irene Tukuafu, district ordinance workers from Nauvoo, serve weekly in the temple. Sister Tukuafu said, “Many folks greet me: ‘Hi, Sister Tukuafu.  How are you?’ I answer, ‘Happy, thank you.’ There is no happier place to be than in the temple.”

At the end of October, President and Sister Peterson will be released as Nauvoo Temple President and Matron, and Spencer J. Condie and his wife, Dorothea, will serve in these positions.

“Although we have had many church callings and experiences,” President Peterson said, “our crowning experience has been to serve in the Nauvoo Temple.”  Sister Peterson echoed her husband’s remarks. “It’s 72 steps from our home to the temple. We’ve served all over the world, but this is the crowning blessing.”