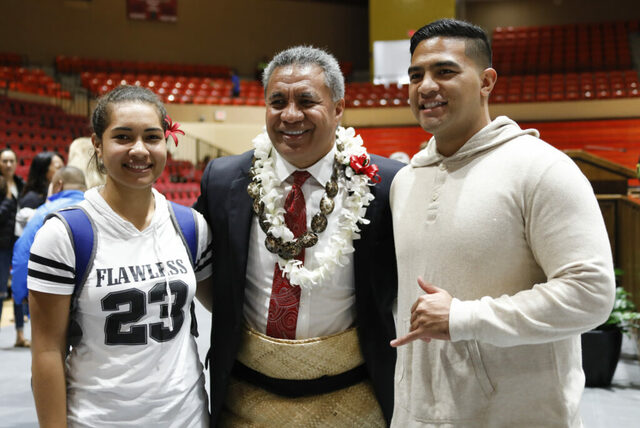 New BYU-Hawaii Scholarships, Missionary Treasures, and Other Messages You May Have Missed from Church Leaders

As a new year begins, leaders of The Church of Jesus Christ of Latter-day Saints have started to make their first remarks of the new decade, speaking at the Missionary Training Center and at schools of the Church Educational System on January 14. Here are a few summaries of recent devotionals.

Elder Dale G. Renlund of the Quorum of the Twelve Apostles and his wife, Sister Ruth Renlund, spoke to missionaries at missionary training centers worldwide.

Elder Renlund’s remarks were focused on Doctrine and Covenants 84:85: “Neither take ye thought beforehand what ye shall say; but treasure up in your minds continually the words of life, and it shall be given you in the very hour that portion that shall be meted unto every man.”

Elder Renlund described to the audience three ways they can treasure up the words of God:

1. Treasure up doctrines that support the commitments to be extended. “One should begin by asking, ‘What doctrine, correctly understood, would motivate someone to accept a specific invitation?’ That is the doctrine you should study, learn and teach,” Elder Renlund said.

2. Treasure up the promises that God makes to those who accept and keep those specific invitations. “Identify experiences where you have received these blessings for yourself. Otherwise, your teaching and testifying will be shallow,” Elder Renlund said.

3. Treasure up answers to questions and concerns that people frequently raise as invitations are extended to them. Elder Renlund encouraged missionaries to record frequent questions and their answers in a study journal. The answers can be found in scriptures, in approved resources, and through prayer.

Sister Renlund discussed how God’s love is at the center of every teaching that comes from a missionary, including the missionaries themselves.

“God expresses His love for each person on earth by sending personal emissaries into the world to find ‘the one’ who is ready to receive His word,” she said.

She also expressed that this love is the same love God feels for each missionary.

“Just like Jesus knew the name ‘Joseph Smith’ in that grove of trees almost 200 years ago, He knows your name and loves you uniquely,” she said.

Read more about Elder and Sister Renlund’s remarks at TheChurchNews.com.

Elder Michael T. Ringwood of the Quorum of the Seventy spoke on gifts from a loving Heavenly Father during BYU’s weekly devotional.

In his remarks, Elder Ringwood discussed how Heavenly Father has provided His children with gifts “for the greatest quest of all: to come unto our Savior and gain eternal life.”

Some of these gifts include the Light of Christ, agency, commandments, Jesus Christ, the Atonement, and the Holy Ghost.

A living prophet is also a gift from God. Elder Ringwood talked about what students could do to follow the prophet’s call including making a regular appointment with the Lord at the temple, transforming their homes into a sanctuary of faith, and utilizing the correct name of the Lord’s Church. He detailed the blessings that come from obeying each of these calls.

“Hear the Lord’s call to you. Obtain His promises. And then prepare to count the miracles and blessings that come as a result,” Elder Ringwood said.

Elder Sikahema shared the struggles that he knows many students who attend the school face, including families living in poverty back home and leaving children at home with family while the students pursue their education.

Elder Sikahema was one of those kids left at home as his parents tried to pursue an education. Because of economic challenges, his mother never received the teaching certificate she strived for.

“Though she never regretted her decision, my angel mother was nevertheless haunted by the fact she was so close to a university degree, yet it was just out of reach,” he said. “So, since a college degree wasn’t in the cards, Mom would make it her life mission to provide her children with the tools to be educated, with very limited resources.”

And now Ruby Sikahema will have a scholarship in her name to continue that tradition.

President Henry J. Eyring, BYU-Idaho President, and his wife, Sister Kelly Eyring, spoke on faith at the opening devotional of the semester in Rexburg.

In his remarks, President Eyring spoke about three truths that spark faith during moments of doubt.

1. The gift of spiritual healing

President Eyring emphasized that all of God’s children have access to the gift of spiritual healing. He explained how as a missionary he prayed that Heavenly Father would give him a spiritual witness of his forgiveness, similar to that of Enos. That experience did not come, but he instead reflected on the small moments in his life where he had felt the Spirit confirm he had received forgiveness.

He later realized that had he had a grand experience and shared that with his investigators he “would have unintentionally made them feel that their more modest spiritual manifestations were inadequate.”

2. The mission of Joseph Smith

President Eyring noted the scrutiny that accompanies Joseph Smith’s life and mission but emphasized that people who knew him throughout his life always stood by him. He noted that his chemist grandfather stayed strong in his testimony of Joseph Smith throughout his life, even with his scientific brain. "Grandpa Eyring" recognized not all things can be understood until after mortality.

“May we live and understand it in a big way and not worry about the small things that we do not understand very well, because they will become clearer as we go on,” President Eyring said. “. . . The things we believe are only a part of the things that are yet to be revealed.”

President Eyring talked about the blessings that come from repenting each day, including peace, joy, humility, and burdens being lifted.

Sister Kelly C. Eyring discussed the importance of planting and nourishing “seeds of faith” that can help provide support during times of trial and questions.

Read more about President and Sister Eyring’s remarks at TheChurchNews.com.

President Bruce C. Kusch, president of LDS Business College, spoke about the powerful testimonies contained in the Primary song, “The Church of Jesus Christ.” President Kusch had the students participate in the devotional with him as he asked them questions related to nine phrases of the song. For example, for the segment, “I know who I am,” President Kusch asked students to answer the questions “What has helped you remember that you are truly a child of God—especially in moments of doubt and difficulty?” Student Rebecca Both shared that as a missionary she received a witness of God's love for her as His child.

“Brothers and sisters, this Primary song is simple and powerful,” President Kusch said. “The gospel, as we strive to live it, may not seem so simple, but things that we can experience in our lives are powerful as we do so.”

His wife, Sister Alynda Kusch, shared a story of pioneers trapped in a snowstorm with the snow too deep for the wagon wheels. Through inspiration, the men received the idea to lay down quilts end to end to make it to their destination.

“As you have faith in [Jesus Christ] and with intent call upon Him, Heavenly Father will guide you and inspire you,” Sister Kusch said. “He will answer your prayers. Your responsibility will be to then get on your feet and walk upon your personal quilts to safety.”

Read more about President and Sister Kusch’s remarks at TheChurchNews.com.