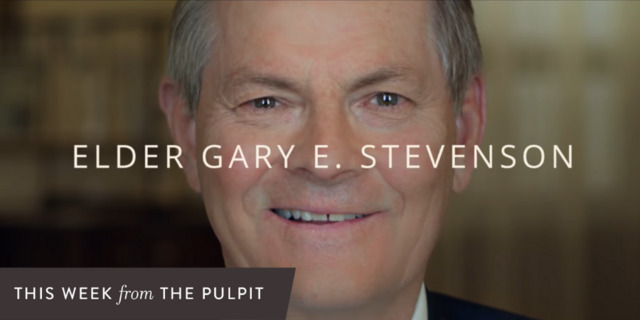 Diligent effort is easier to sustain when results are obvious and come quickly. The real test of diligence, however, may be maintaining consistency even without signs of progress or reward. For many, the effects of the pandemic have slowed life down, bringing increased feelings of monotony. As days and week blur together, it can be more difficult stay dedicated to important spiritual habits.

Several social media messages from Church leaders this week can help re-inspire you to keep up with the small, but essential, efforts that do bring progress in the long run. Because, as Elder Jeffrey R. Holland of the Quorum of the Twelve Apostles shared on Facebook this week, "Every one of us has times when we need to know things will get better."

Elder Quentin L. Cook of the Quorum of the Twelve Apostles shared on Facebook that regular spiritual habits will strengthen our spiritual stamina.

“Just as repetition and consistent effort are required to gain physical or mental capacity, the same is true in spiritual matters,”  he wrote. “Pondering the scriptures regularly—rather than reading them occasionally—can substitute a superficial understanding for a sublime, life-changing enhancement of our faith.”

“What a scripture in the Book of Mormon meant to me when I first read it at age 16 is not conclusive upon me as I read it at age 85. With the benefit of my life’s experiences and with my greater familiarity with revelation, I can learn things that were not available to me yesterday by reading the scriptures today,” wrote President Oaks on Facebook.

And, Elder Ronald A. Rasband of the Quorum of the Twelve Apostles shared how his father woke up at 4:00 a.m. to drive a bread delivery truck and wouldn’t return until late in the evening. Watching his father work persistently left a “lasting impression” on him.

May the messages this week help members take a moment to allow themselves to appreciate their own diligence and remember that because of Christ, all spiritual efforts are worth making.

In a continuation of the #HearHim video series, Elder Gary E. Stevenson of the Quorum of the Twelve Apostles shared an impactful experience from his childhood.  As a young boy, Elder Stevenson was enjoying jumping from rock to rock while hiking with his father.

Just as he was about to climb onto a large rock, Elder Stevenson’s father pulled him back by his belt and told him not to climb that rock. Surprised, Elder Stevenson obeyed and began following behind his father on the trail.

His father replied with a question: “Gary, what do you know about the Holy Ghost?”

Sister Cristina B. Franco, Trusting Fully in the Lord to Draw Upon Priesthood Power

In continuation of the Church News series titled “Women of Covenant,” Sister Cristina B. Franco, second counselor in the Primary general presidency, wrote about how fully trusting in the Lord is part of accessing His priesthood power.

Sister Franco shared an experience that taught her about trusting in the Lord. While considering an eye surgery to improve her vision, Sister Franco learned that 1 in 1,000 patients become blind from this surgery. This statistic frightened Sister Franco and she told her husband she did not want to go through with the surgery. His response surprised her.

“Cris, what if Heavenly Father allows your sight to be taken?” her husband asked.

Sister Franco responded that she wouldn’t understand why Heavenly Father would take her sight because, as she said, “He knows I need to see.” Her husband then asked her if she was willing to submit to the Lord’s will.

“I didn’t know what to say, so I said what I knew: ‘I have faith that, for the Lord, nothing is impossible. And I have faith to be healed. Will you give me a blessing so everything will be OK?’” wrote Sister Franco.

She did receive a blessing and proceeded with the eye surgery. Everything went well in surgery, and the results were even better than what the doctor had anticipated.